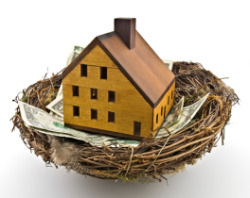 SUMMARY: A win for older Australians, but probably at the expense of first-home buyers.

You hardly call it an all-out war on property prices. In reality, it’s impact is barely likely to be felt.

Like an earthquake measuring “2” on the Richter scale – not commonly felt by people.

But the government has got two bits of super legislation through parliament, which will have some sort of an impact on property prices. Though, I’m guessing, probably not what the government is intending (more on that towards the end).

They are being sold as part of the “Turnbull Government’s housing affordability plan”.

The first of those is an incentive for older Australians to downsize, to get up to $300,000 into a super fund when they sell a home that they have lived in for more than 10 years.

And the second is the new First Home Super Saver Scheme (FHSSS), which will give (predominantly) young’uns a leg up into their first home by way of using super to help them build their first deposit, in a tax-friendly environment.

Downsizing – adding muscle to your super

On the face of it, this is good news.

Previously, the benefits of releasing equity by downsizing have faced headwinds. There is the cost of selling (agent’s fees and advertising expenses) and the cost of repurchasing (stamp duty).

This incentive doesn’t attack either of those two significant costs.

But it does provide a significant upside – the ability to create a further tax-free (potentially low-tax) income.

The general rules around this are that you must be over 65 and you must have lived in the house for at least 10 years.

The real power of this is that this money can then be used to create a tax-free income stream, as it can be put straight into a super pension (paid after turning 65). As a bonus, because the money is, in essence, an NCC, it should then pass even to non-dependants (particularly your adult children), or your legal personal representative, on death, tax free.

For those who are risk averse and don’t want to put the money back into risk assets, you don’t have to.

You can invest it in cash (though, via a platform, with current interest rates, this is unlikely to be overly productive).

If the money was invested in your own name, you would be paying up to 47c in the dollar on anything it earned. In super, in a pension, you will pay no tax, if you are still below the $1.6m transfer balance cap (TBC).

If you are above the TBC, then the money could still sit in super, paying a maximum of 15% in tax. This may, or may not, be better than your personal marginal tax rate. (You’ll need personal advice on this.)

Even if you’re 90 and downsize to, finally, move into an aged-care facility, you’ll be able to use this new rule.

Any time you give first home buyers more free money, it only seems to lead to one thing – the price of first home buyer properties increasing. (I’ll deal with that whinge below.)

But this is certainly a far better incarnation of this type of “gesture” than the one put forward by Kevin Rudd, which effectively locked people out of buying their first home for four years. It was a spectacular failure.

This can then be drawn on, along with a deemed rate of earnings, to purchase a first home.

But you can’t go over your annual CC limit of $25,000 in order to do it. So, the people who are going to benefit from this the most is likely to be those on a pretty tight income bracket.

If you earn too much, you’re not going to be able to contribute very much (and still stay under your $25,000 CC limit). And if you earn too little, you won’t get the full advantage of the potential tax breaks and probably can’t afford to make the maximum contributions.

Those earning $50k: They are receiving $4750 in superannuation guarantee contributions (SGB) from their employer. They have room of up to $20,250 to hit their CC cap, but they can’t use any more than $15,000 towards this scheme, in one year. The number of singles earning $50,000 a year that could afford to salary sacrifice $15,000 into super would be limited.

Earning $100k: The sweet spot is around this income level. They will receive $9500 in SGC, so could contribute $15,500 in salary sacrifice or other CCs, only $15,000 of which would count towards what can be withdrawn for the first home purchase, or the amount that can be withdrawn.

The best positioned to take advantage of this opportunity will be those earning between about $95k and $120k.

If your kids are saving for their first home, then talk to them about the FHSSS. Good chance they already know. But it’s a free gift that won’t be used by everyone buying their first home – though arguably it should be.

But for the fact that …

The “downsizing” option is literally designed to get older Australians out of their larger homes and into smaller homes. By doing so, they will receive incentives to free up capital by generally selling more expensive homes to release equity, to purchase cheaper homes.

Think about that. What will that do? It will likely increase demand for houses in that $600-700k price bracket. First home buyer (FHB) territory. Or not far above.

And then there’s the FHSSS. This is designed to put more money into the hands of the FHBs by giving them an tax-break incentive to save for their first home. (But I don’t know how many times we need to go through this … whenever you put more money in the hands of FHBs, you increase demand. And prices.)

So, on both counts, you’re increasing demand for prices in what would be considered the FHB market.

You could take it a little bit further … if you allow a couple to tip an extra $600,000 into super (or an individual to tip $300,000 into super), you are likely to increase the number of SMSFs that are going to consider using that influx of funds to purchase a property in the fund.

From John Howard’s cash handouts to FHBs after the GST kicked in, to the various state-based bonuses that followed, it’s been pretty rare that government meddling in the last 20 years hasn’t, in my opinion, added to demand for FHB properties.

And that inevitably gets reflected in higher prices. It’s hard to believe these two measures won’t do the same.