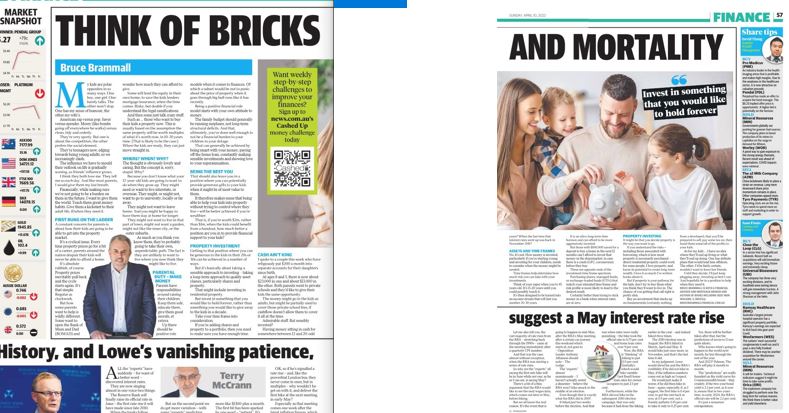 My kids are polar opposites in so many ways. One boy, one girl. One barely talks. The other won’t stop. One has my sense of humour, the other my wife’s.

American rap versus pop. Saver versus spender. Messy (like bombs going off everywhere) versus clean, tidy and orderly.

They’re very sporty. But one is about the competition, the other prefers the social element.

They’re teenagers now, edging towards being young adults, so we increasingly clash. The influence we have to mould their outlook on life is gradually waning, as friends’ influence grows.

I think they both love me. They tell me so each day. And like most parents, I would give them my last breath.

Financially, while making sure we’re not going to be a burden on them in the future, I want to give them the world. Teach them great money habits. Give them a kick-start to their adult life, if/when they need it.

First rung on the ladder

A constant concern for parents is about how their kids are going to be able to get into the property market.

It’s a cyclical issue. Every time property prices go for a bit of a canter, parents around the nation despair their kids will never be able to afford a home.

But how some parents want to help is wildly different. Some want to open the Bank of Mum and Dad (BOMAD) and wonder how much they can afford to give.

Some will lend the equity in their own home, to save the kids lenders mortgage insurance, when the time comes. Risky, but doable if you understand the legal ramifications.

And then some just talk crazy stuff.

Such as … those who want to buy their kids a property now. This is usually based on the assumption the same property will be worth multiples of what it’s worth now, in 10-20 years’ time. (That is likely to be the case.) When the kids are ready, they can just move straight in.

The thought is obviously lovely and caring. But the concept is, sorry, stupid. Why?

Because you don’t know what your 12-year-old kids are going to want to do when they grow up. They might need or want to live interstate, or overseas. They might or might not, want to go to university, locally or far away.

They might not want to leave home. And you might be happy to have them stay at home for longer.

As much as you think you know them, they’re probably going to take their own, unpredictable, path. The fact is they are unlikely to want to live where you now think they might like to live.

Parents have responsibilities around raising their children. Keep them safe, educate them, give them good morals, etc.

Up there should be positive role models when it comes to finances.

Of which a subset would be not to panic about the price of property, when it goes through big bull runs like it has recently.

Being a positive financial role model starts with your own attitude to money.

The family budget should generally be running surpluses, not long-term structural deficits. And that, ultimately, you’ve done well enough to not be a financial burden to your children in your dotage.

That can generally be achieved by being smart with your money, paying off the home loan, constantly making sensible investments and showing love to your superannuation.

Being the best you

That should also leave you in a position where you can potentially provide generous gifts to your kids when it might be of most value to them.

It therefore makes sense that being able to help your kids into property – without trying to control where they live – will be better achieved if you’re wealthier.

That is, if you’re worth $2 million, rather than $1 million, when the kids could benefit from a handout, how much better a position are you in to provide financial support to your kids?

Getting to that position where you can be generous to the kids in their 20s or 30s can be achieved in a number of ways.

But it’s basically about taking a sensible approach to investing – taking a long-term approach to quality asset classes, particularly shares and property.

Take your time frame into consideration. If you’re adding shares and property to a portfolio, then you need to make sure you have enough time.

I spoke to a couple recently who have religiously put $200 a month into separate accounts for their daughters since birth.

The money might go to the kids as adults, but might be partially used to cover those private school fees, if cashflow doesn’t allow them to cover it all at the time.

Having money sitting in cash for somewhere between 12 and 20-odd years?

No, it’s not. How money is invested, particularly if you’re starting young and investing for your children, needs to consider when the money might be needed.

Timeframes help determine how much risk you can take with your investments.

Think of your super when you’re 45 years old. It’s 15-20 years until you could possibly touch it. It’s then designed to be turned into an income stream that will last you another 20-30 years. It is an ultra-long term time horizon and can afford to be more aggressively invested.

But those with $100,000 saved for a deposit to buy a home in the next 12 months can’t afford to invest that money in the sharemarket, in case there is a crash (GFC, Corona) before they buy.

These are opposite ends of the investment timeframe spectrum.

Purchasing shares, managed funds, or exchange-traded funds (ETFs) that match your intended time frame and risk profile is for more likely to lead to the desired result.

Certainly better than sticking money in a bank when interest rates are low.

It might be that you decide that property is the way you want to go as an investment for them.

If you understand the risks – including those associated with borrowing, which is how most property is purchased – direct residential property could work for some people. I love property. And I know its potential to create long-term wealth. I love it so much I’ve written books about it (see the end of this article).

But if property is your pathway for the kids, don’t try to buy them what you think they’ll want to live in. The chance of you getting that call right is pretty slim.

Buy an investment that stacks up on fundamentals (certainly nothing from a developer), that you’ll be prepared to sell, pay some tax on, then hand them some/all of the profits to your kids.

As for my kids … I have no idea where they’ll end up living or what they’ll end up doing. One has definite plans that would ultimately lead him offshore. The other, I’d be fairly certain, wouldn’t want to leave her friends.

Until they decide, I’ll just keep plugging away, investing as best I can. And hopefully be in a position to help when they need it.

Bruce Brammall is both a financial adviser and mortgage broker and author of books including Debt Man Walking. E: bruce@brucebrammallfinancial.com.au.