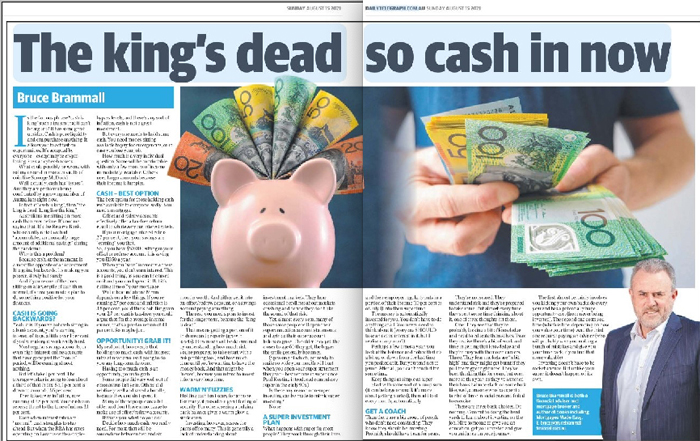 Is the famous phrase “cash is king” such a truism that it can’t be argued?

It has some great upsides. Cash is pure liquidity and can purchase anything. It allows you to act fast on opportunities. It’s accepted by everyone – except maybe crypto-loving Russian cyber-hackers.

What could possibly be wrong with rolling around in monster vaults of coin like Scrooge McDuck?

Well, actually, cash has “issues”. And they are problems being confronted by growing number of Australians right now.

Australians are sitting on more cash than ever before. It’s not me saying that. It’s the Reserve Bank, who recently noted we had “accumulated an unusually large amount of additional savings” during the pandemic.

Why is this a problem?

Because cash, at the moment, is almost the opposite of an investment. It is going backwards. It’s making you poorer, slowly but surely.

And if you’re one of the ones sitting on a larger pile of cash than normal, it’s time you made a plan to do something positive for your finances.

Yeah, it is. If you’ve got cash sitting in a bank account, you’re earning interest of, tops, a little over 1 per cent, if you’re making it work really hard. Most regular savings accounts, or even high-interest online accounts that have gone past the “bonus” period, will be earning almost nothing.

But let’s take 1 per cent. The average worker is going to lose about a third of that in tax. So, 1 per cent is down to around 0.65 per cent. Then take away inflation, now running at 3.8 per cent. Your cash is in reverse thrust to the tune of minus 3.1 per cent.

Even when interest rates are “normal”, cash struggles to stay ahead. But when the RBA has rates operating on Lazarus-with-a-triple-bypass levels, and there’s any sort of inflation, cash is not a great investment.

But everyone needs to hold some cash. You need money sitting available to pay for emergencies, or in case you lose your job.

How much is a very individual question. Some will be comfortable with only a few months of income immediately available. Others, need larger amounts because their income is lumpier.

The best option for those holding cash isn’t available to everyone, sadly. You need a mortgage.

Offset and redraw accounts effectively offer a tax-free return equal to whatever your interest rate is.

When you “save” interest via these accounts, you don’t earn interest. This is a good thing, as you can’t be taxed on it and you can’t spend it! But it’s cutting time off your mortgage.

Will it beat inflation? Mmm, depends on a few things. If you’re earning 2.7 per cent and inflation is 3.8 per cent, you’d think not. But given your 2.7 per cent is tax-free, you could argue that for the average income-earner, that’s a pre-tax return of 4.1 per cent. So, maybe just.

My real point, however, is that holding too much cash, with interest rates at near zero, isn’t going to do you any long-term favours.

Having too much cash is an opportunity, yours to grab.

Some people did very well out of coronavirus last year. Others did relatively well and saved a bundle, because they couldn’t spend it.

Many of those people are a bit older and don’t have a mortgage to make use of offset/redraw accounts.

If that’s you, what do you do?

Decide how much cash you really need. For most, that will be somewhere between two and six months’ worth. And either get it into an offset/redraw account, or a savings account paying something.

The rest, you need a plan to invest for the longer term, because the “king is dead”.

That means getting a portion of it in shares and property (growth assets). How much will be determined by understanding how much risk you’re prepared to take (start with a risk profiling tool) and how much time until you’re wanting to have the money back. And that might be “never”, because you intend to invest it for a very long time.

Holding cash isn’t scary for anyone. For many, it provides a great feeling of security. For others, seeing a bulging bank balance gives a warm glow, a smile even.

Investing, however, scares the pants off so many. This is generally a lack of understanding about investment markets. They hear occasional headlines about markets crashing and decide they don’t like the sound of that risk.

Yet, almost every year, many of those same people will open their superannuation account statements and grin as their super account balances grow. The older they get, the closer to age 60 they get, the bigger the smile generally becomes.

(Speaking of which, get ready to smile so wide your mouth will hurt when you open your super statement this year – best returns in super since Paul Keating introduced compulsory super in the early 90s.)

What happens with super for most people? They work through their lives and their employer regularly puts in a portion of their income (10 per cent as of 1 July) into their super fund.

The money is automatically invested for you. You don’t have to do anything at all. You never need to think about it (everyone SHOULD take an active interest in it, but I realise many won’t).

Perhaps a few times a year, you look at the balance and notice that it’s a bit up or down from the last time you peaked at it. But you tend not to panic. After all, you can’t touch it for some time.

Keep things as simple as super.

Start with some sort of a lump sum (it can be large or small, it’s more about getting started), then add to it every month, automatically.

Then there are a big group of people who don’t need convincing. They know they should be investing. Probably should have been for years.

They’re not scared. They understand risk and they’re prepared to take some. But almost every time they spend some time thinking about it, one of three thoughts hit them.

One: They see that they’re probably lacking a bit of knowledge and need to educate themselves. Two: they realise there’s a bit of work and time in getting that knowledge and they’re busy with their own careers. Three: They fear markets are “a bit high” and they might get burnt if they pull the trigger right now.

They’ve been thinking this for years, but even more so this year, as they’ve watched their bank balance stack on some bulk like, well, someone who has spent a fair bit of time in lockdown and failed to exercise.

There are three basic choices. Do nothing. Commit to doing the hard yards to learn about investing on the job. Hire someone to give you an education, get you invested and give you guidance on your journey.

The first almost certainly involves you kicking your own backside every year and has a potentially huge opportunity cost (from never being invested). The second one costs you time (which is fine, depending on how you value your time).

And the third one requires paying an adviser (who will probably save you making a bunch of mistakes and give you your time back, if you find that more valuable).

Investing doesn’t have to be rocket science. But unlike your super, it doesn’t happen on its own.