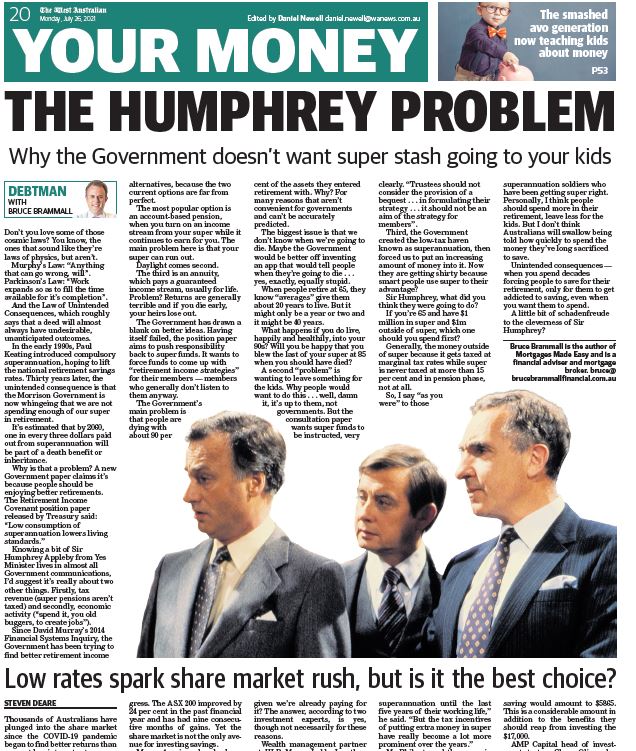 Don’t you love some of those cosmic laws? You know, the ones that sound like they’re laws of physics, but aren’t.

Murphy’s Law: “Anything that can go wrong, will”. Parkinson’s Law: “Work expands so as to fill the time available for it’s completion”.

And the Law of Unintended Consequences, which roughly says that a deed will almost always have undesirable, unanticipated outcomes.

Thirty years later, the unintended consequence is that the Morrison Government is now whingeing that we are not spending enough of our super in retirement.

It’s estimated that by 2060, one in every three dollars paid out from superannuation will be part of a death benefit or inheritance.

Why is that a problem? A new government paper claims it’s because people should be enjoying better retirements. The Retirement Income Covenant position paper said: “Low consumption of superannuation lowers living standards.”

Since David Murray’s 2014 Financial Systems Inquiry, the Government has been trying to find better retirement income alternatives, because the two current options are far from perfect.

The most popular option is an account-based pension (ABP), when you turn on an income stream from your super, while it continues to earn for you. The main problem here is that your super can run out.

The third is an annuity, which pays a guaranteed income stream, usually for life. Problem? Returns are generally terrible and if your die early, your heirs lose out.

The government has drawn a blank on better ideas. Having itself failed, the position paper aims to push responsibility back to super funds.

They want to force funds to come up with “retirement income strategies” for their members. (Members generally don’t listen to them anyway.)

The Government’s main problem is this: People are dying with around 90 per cent of the assets they entered retirement with.

Why? For many reasons that aren’t convenient for governments and can’t be accurately predicted.

The biggest issue is that we don’t know when we’re going to die. (Maybe the Government would be better off inventing an app that would tell people when they’re going to die … yes, exactly, equally stupid.)

When people retire at 65, they know “averages” give them about 20 years to live. But it might only be a year or two and it might be 40 years.

What happens if you do live, happily and healthily, into your 90s? Will you be happy that you blew the last of your super at 85 when you should have died?

A second “problem” is wanting to leave something for the kids. Why people would want to do this … well, dammit, it’s up to them, not governments. But the consultation paper wants super funds to be instructed, very clearly. “Trustees should not consider the provision of a bequest … in formulating their strategy … it should not be an aim of the strategy for members”.

Third, government created the low-tax haven known as superannuation, then forced us to put an increasing amount of money into it. Now they are getting shirty because smart people use super to their advantage.

Sir Humphrey, what did you think they were going to do?

Generally, the money outside of super, because it gets taxed at marginal tax rates, while super is never taxed at more than 15 per cent and, in pension phase, not at all.

So, I say “as you were” to those superannuation soldiers who have been getting super right. Personally, I think people should spend more in their retirement, leave less for the kids. But I don’t think Australians will swallow being told how quickly to spend the money they’ve long sacrificed to save.

Unintended consequences. When you spend decades forcing people to save for their retirement, only for them to get addicted to saving.

A little bit of schadenfreude to the cleverness of Sir Humphrey?