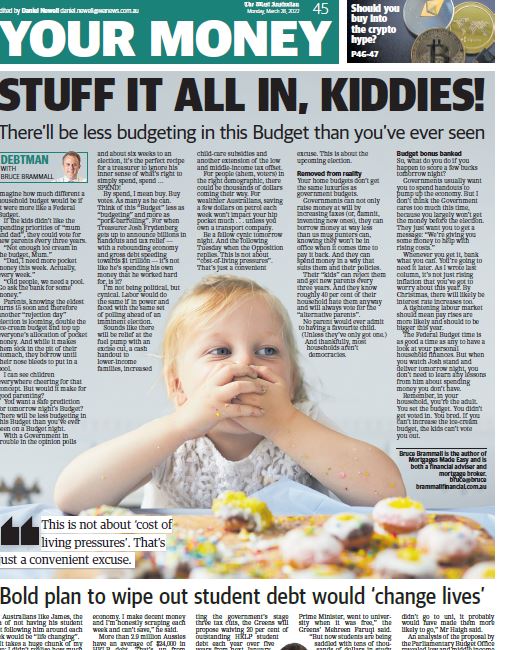 Imagine how much different a household budget would be if it were more like a Federal Budget.

If the kids didn’t like the spending priorities of “mum and dad”, they could vote for new parents every three years.

“Not enough ice cream in the budget, Mum.” “Dad, I need more pocket money this week. Actually, every week.” “Old People, we need a pool. Go ask the bank for some money.”

Parents, knowing the eldest turns 15 soon and therefore another “rejection day” election is looming, double the ice-cream budget and top up everyone’s allocation of pocket money. And while it makes them sick in the pit of their stomach, they borrow until their nose bleeds to put in a pool.

Hmm. I can see children everywhere cheering for that concept. But would it make for good parenting?

You want a safe prediction for tomorrow night’s budget? There will be less budgeting in this budget than you’ve ever seen on a Budget night.

With a government in trouble in the opinion polls, about six weeks to an election, it’s the perfect recipe for a Treasurer to ignore his inner sense of what’s right to, simply, spend, spend … SPEND!

By spend, I mean buy. Buy votes. As many as he can. Think of this “budget” less as “budgeting” and more as “pork-barrelling”.

For when Treasurer Josh Frydenberg gets up to announce billions in handouts and tax relief – with a rebounding economy and gross debt speeding towards a trillion – it’s not like he’s spending his own money that he worked hard for, is it?

(I’m not being political, but cynical. Labor would do the same if in power and faced with the same set of polling ahead of an imminent election.)

Sounds like there will be relief at the fuel pump with an excise cut, a cash handout to lower-income families, increased child-care subsidies and another extension of the low- and middle-income tax offset.

For people (ahem, voters) in the right demographic, there could be thousands of dollars coming your way. For wealthier Australians, saving a few dollars on petrol each week won’t impact your hip pocket much … unless you own a transport company.

Be a fellow cynic tomorrow night. And the following Tuesday when the Opposition replies. This is not about “cost of living pressures”. That’s just a convenient excuse. This is about the upcoming election.

Your home budgets don’t get the same luxuries as government budgets.

Governments can not only raise money at will by increasing taxes (or, damnit, inventing new ones), they can borrow money at way less than us mug punters can, knowing they won’t be in office when it comes time to pay it back. And they can spend money in a way that suits them and their policies.

Their “kids” can reject them and get new parents every three years. And they know roughly 40 per cent of their household hate them anyway and will always vote for the “alternative parents”.

No parent would ever admit to having a favourite child. (Unless they’ve only got one.) And thankfully, most households aren’t democracies.

So, what do you do if you happen to score a few bucks tomorrow night?

Governments usually want you to spend handouts to pump the economy. But I don’t think the government cares too much this time, because you largely won’t get the money before the election. They just want you to get a message: “We’re giving you some money to help with rising costs”.

Whenever you get it, bank what you can. You’re going to need it later.

As I wrote last column, it’s not just rising inflation that you’ve got to worry about this year. By Christmas, there will likely be interest rate increases too.

A tightening labour market should mean pay rises are more likely and should to be bigger this year.

Federal Budget time is as good a time as any to have a look at your personal household finances.

But when you watch Josh stand and deliver tomorrow night, you don’t need to learn any lessons from him about spending money you don’t have.

Remember, in your household, you’re the adult. You set the budget. You didn’t get voted in. You bred. If you can’t increase the ice-cream budget, the kids can’t vote you out.