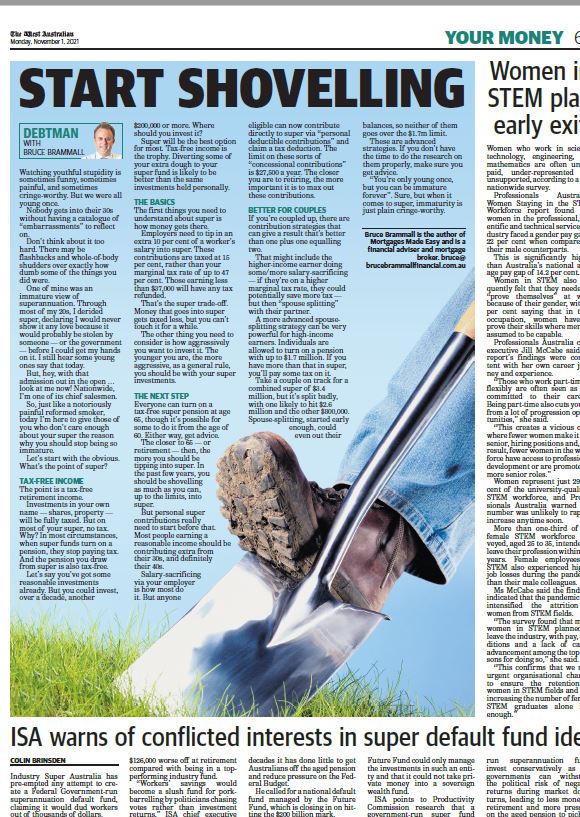 Watching youthful stupidity is sometimes funny, sometimes painful, and sometimes cringeworthy. But we were all young once.

Nobody gets into their 30s without having a catalogue of “embarrassments” to reflect on.

Don’t think about too hard. There may be flashbacks and whole-of-body shudders over exactly how dumb were some of the idiotic things you did.

One of mine was an immature view of superannuation. Through most of my 20s, I derided super. Declared I would never show it any love, because it would probably be stolen by someone, or the government, before I could get my hands on it. (Still hear some young’uns say that today.)

But, hey, with that admission out in the open … look at me now! Nation-wide, I’m one of its chief salesmen!

So, just like a notoriously painful reformed smoker, today I’m here to give those of you who don’t care enough about your super the reason why you should stop being so immature.

Let’s start with the obvious. What’s the point of super?

The point is: tax-free retirement income.

Investments in your own name – shares, property – will be fully taxed.

But on most of your super, no tax. Why? In most circumstances, when super funds turn on a pension, they stop paying tax. And the pension you draw from super is also tax free.

Let’s say you’ve got some reasonable investments already. But you could invest, over a decade, another $200,000 or more. Where should you invest it?

Super will be the best option for most. Tax-free income is the trophy. Diverting some of your extra dough to your super fund is likely to be better than the same investments held personally.

The first things you need to understand about super is how money gets there.

Employers need to tip in an extra 10 per cent of their staff’s salary into super. These contributions are taxed at 15 per cent, rather than your marginal tax rate of up to 47 per cent. (Those earning less than $37,000 will have any tax refunded.)

That’s the super trade off. Money that goes into super gets taxed less, but you can’t touch it for a while.

The other thing you need to consider is how aggressively you want to invest it. The younger you are, the more aggressive, as a general rule, you should be with your super investments.

Everyone can turn on a tax-free super pension at age 65. (Though it’s possible for some to do it from age 60. Get advice.)

But personal super contributions really need to start before that. Most people earning a reasonable income should be contributing extra from their 30s, but definitely their 40s.

Salary sacrifice, via your employer, is how most do it. But anyone eligible can now contribute directly to super via “personal deductible contributions” and claim a tax deduction.

The limit on these sorts of “concessional contributions” is $27,500 a year. The closer you are to retiring, the more important it is to max out these contributions.

If you’re coupled up, there are contribution strategies that can give a result that’s better than one plus one equalling two.

That might include the higher-income earner doing some/more salary sacrificing – if they’re on a higher marginal tax rate, they could potentially save more tax – but then “spouse splitting” with their partner.

A more advanced spouse splitting strategy can be very powerful for high-income earners. Individuals are allowed to turn on a pension with up to $1.7 million. If you have more than that in super, you’ll pay some tax on it.

Take a couple on track for combined super of $3.4 million, but it’s split badly, with one likely to hit $2.6 million and the other $800,000. Spouse splitting, started early enough, could get even out their balances, so neither of them goes over the $1.7 million limit.

These are advanced strategies. If you don’t have the time to do the study on them properly, get advice.

“You’re only young once, but you can be immature forever”. Sure, but when it comes to super, immaturity is purely cringeworthy.