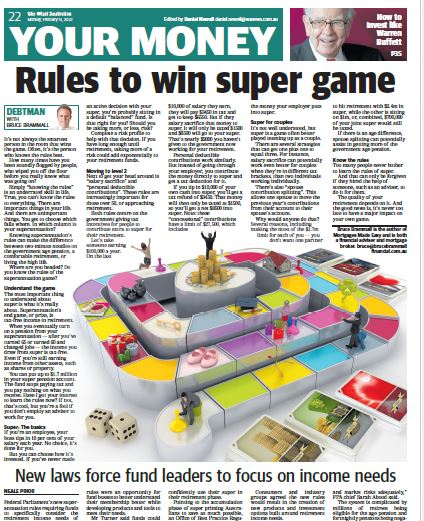 It’s not always the smartest person in the room that wins the game. Often, it’s the person who knows the rules best.

How many times have you been soundly flogged by children, or mates, who wiped you off the floor before you really knew what was going on?

Simply “knowing the rules” is an underrated skill in life. True, you can’t know the rules to everything. There are important things in your life. And there are unimportant things. You get to choose which falls where.

In which column is your superannuation?

Knowing superannuation’s rules can make the difference between two-minute noodles on the government age pension, a comfortable retirement, or living the high life.

Where are you headed? Do you know the rules of the superannuation game?

The most important thing to understand about super is what it’s really about. Superannuation’s end game, or prize, is … tax-free income in retirement.

When you eventually turn on a pension from your superannuation – after you’ve turned 65 or turned 60 and changed jobs – the income you draw from super is tax-free. Even if you’re still earning income from other assets, such as shares or property.

You can put up to $1.7 million in your super pension account. The fund stops paying tax and you pay nothing on what you receive.

Got your interest to learn the rules now? If not, that’s cool, but you’re a fool if you don’t employ an adviser to work for you.

If you’re an employee, your boss tips in 10 per cent of your salary each year. No choice, it’s done for you.

But you can choose how it’s invested. If you’ve never made an active decision with your super, you’re probably sitting in a default “balanced” fund. Is that right for you? Should you be taking more, or less, risk?

Complete a risk profile to help with that decision. If you have long enough until retirement, taking more of a risk could add exponentially to your retirement funds.

Next to get your head around is “salary sacrifice” and “personal deductible contributions”.

These rules are increasingly important for those over 50, or approaching retirement.

Both rules centre around the government giving tax incentives for people to contribute extra to super for their retirement.

Personal deductible contributions work similarly. But instead of going through your employer, you contribute the money directly to super and get a tax deduction for it.

Note: these “concessional” contributions have a limit of $27,500, which includes the money your employer puts into super.

It’s not well understood, but superannuation is a game often better played teaming up as a couple.

There are several strategies that can get one plus one to equal three. For instance, salary sacrifice can potentially work even better for couples when they’re in different tax brackets, than two individuals working individually.

There’s also “spouse contribution splitting”. This allows one spouse to move the previous year’s contributions from their account to their spouse’s account.

Why would anyone do that? Several reasons, including making the most of the $1.7 million limit for each of you – you don’t want one partner to hit retirement with $2.4m in super, while the other is sitting on $1 million, or, combined, $700,000 of your joint super would still be taxed.

If there is an age difference, spouse splitting can potentially assist in getting more of the government age pension.

Too many people never bother to learn the rules of super. And that can only be forgiven if they hired the help of someone, such as an adviser, to do it for them.

The quality of your retirement depends on it. And the good news is, it’s never too late to have a major impact on your own game.