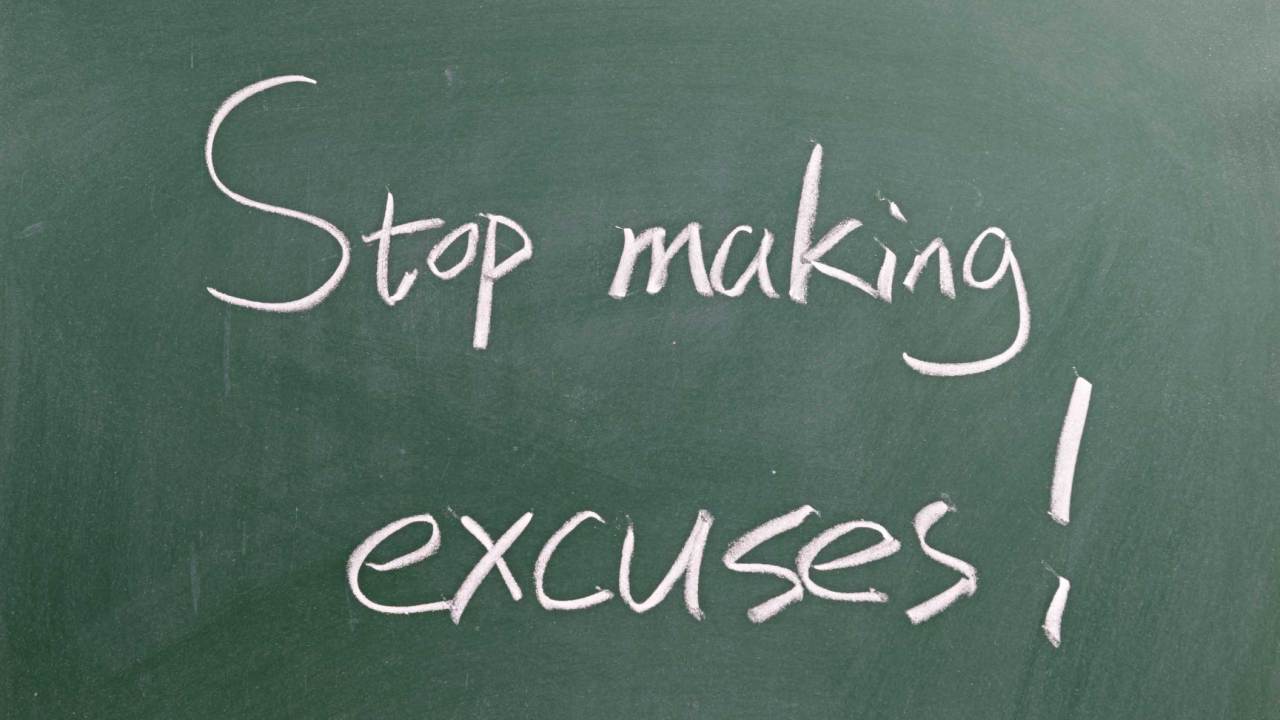 Kids always seem to forget their parents were once their age. And every excuse they try to pull on is one their oldies have previously used themselves.

“Oh, DebtBoy. You haven’t done your homework because you haven’t had time? But weren’t you watching YouTube when I just walked in?”

Excuses come in two distinct varieties. There are excuses for the things someone actively did or didn’t do, for which others require an explanation.

Such as: “I can’t wait to hear a neighbour’s excuse for some recent odd behaviour. In the street. In the middle of the night. That was caught on CCTV.”

And then there are excuses that you don’t have to answer to, because no-one will ever ask you the question.

Every single one of us make these excuses every single day. To ourselves, if we’re honest. If we’re not being honest, we just ignore them.

They cover things such as: not starting the diet/fitness program you know you need; not eating breakfast; not speaking to your mother as often as you should; and having “just one more” drink/beer/donut.

Mmm. Okay, okay. They’re mine. But you get the picture. You’ll have your own things you’re making excuses for, that you know you should be doing, but don’t.

Why you’re not budgeting/saving. Why you haven’t cancelled the gym membership, despite not having been there for a year.

As a financial adviser, I’ve heard every answer possible to the question: “So, why don’t you invest?”

Don’t earn enough. Don’t have time. Don’t know how. Can’t afford to. Don’t have spare money. Markets are high and I’ve missed the boat. Things are really tight at the moment. My partner spends too much.

They are all excuses. And they’re all bad. Nay, pathetic.

Whatever your excuse has been, the time to “stop the bulltish” is now.

You do earn enough (you probably just spend too much). You can find time. It doesn’t matter if markets are high. I’m tipping things are always tight.

And … you can’t not afford to.

It’s about priorities. You want to become wealthier – everybody does. And once you do decide to change your priorities to shift investing “up there”, most of your battle, against yourself, is won.

It really only requires a small mindset change to become an investor. And it doesn’t take huge knowledge. (Though, if you really don’t get it, or don’t have the time, get a financial adviser to push/coach you.)

You probably have some savings. Tip in a little. Make it simple, by using an index fund, such as those from Vanguard.

If you don’t have savings, then the odds are high that you have a spending issue. And I can’t help you today. I’m talking to those who have at least shown enough self-control on that front already.

“But the markets are at a peak! Surely this is a bad time?”

After you start an investment, you need to add to it regularly. Preferably every month. A direct debit, straight out of your bank account direct into the investment, so it’s invested without you having to think.

This is exactly how your super works. Each quarter/month/fortnight, your employer puts money into your super and it gets automatically invested.

You don’t think about it. It just happens. You don’t pay attention to what investment markets are doing, most of the time, and you don’t need to.

The act of regular, automatic, investing will mean that you’re buying more when markets fall, meaning you’re picking up some assets for a cheaper price, benefiting when markets eventually rise. (And they will. Unless civilisation collapses, and we all die. In which case, clearly it won’t matter.)

It will take away the fear of buying when markets are too high … and when markets have started crashing, or have crashed. You’ll be buying little bits all the time, whether markets are up, down, or in between.

It doesn’t have to be expensive. There are some great cost-effective options available for even the smallest of investors.

For those near retirement, it can be even simpler, by adding more to your super and potentially picking up a tax deduction along the way.