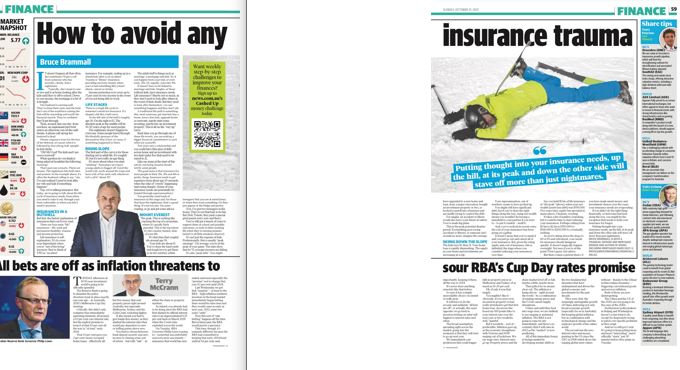 It doesn’t happen all that often, but sometimes I’ll get a call from someone who has recently, clearly, had a nightmare.

Typically, she’s mum to one or two and is at home looking after the kids till they’re off to school. Down to one income, the mortgage is a bit of a struggle.

Her husband is earning well. They’ve done their sums and the time she’s out of the workforce raising the kids will be rewarding and worth the financial stretch. They’re confident they’ll get through.

Then, in a dream around 3 o’clock one morning, from nowhere, an unpleasant plot-twist enters. A phone call saying her husband is dead.

Dream-sequence tears for the loss of her beloved, of course, which is followed by that sitting-bolt-upright-in-bed cliché.

What question do you think is being asked at breakfast the following morning?

That’s just one scenario. There are dozens. The nightmare hits both men and women. And, in the example above, it’s often the husband calling me to say “um, I’ve just realised I need to look after my wife and kids if something happens”.

Yep, we’re talking insurance. But today, we’re going to talk about the life cycle of insurance needs, from when you need to take it out, through your most vulnerable, to when you don’t need it anymore.

INSURANCES IN A NUTSHELL

But first, the fastest explanation of the insurances that you’ll ever read.

Life insurance is self-explanatory. It’s to cover your dependants when you’re not of the living anymore. Best to think of TPD as “accident” insurance. For example, ending up in a wheelchair after a car accident. Trauma is “illness” insurance, providing recovery money when you’ve suffered something like a heart attack, cancer or stroke.

Income protection is designed to cover up to 75 per cent of your income in the event of you not being able to work.

There is a rough life cycle to someone’s needs for insurance. It’s shaped a bit like a bell curve.

At the left side of the bell is roughly age 30. On the right is 65. The absolute peak in the middle will be 45-50 years of age for most people.

The nightmare doesn’t happen to everyone. Some people travel through life blissfully ignorant of the devastation they’d face, or cause, if something happened to them.

The first part of the curve is for those starting out in adult life. It’s roughly 30, but it’s not really an age thing.

It’s more lined about when you start “adulting”. And nowadays we expect young adults to bugger off, travel the world a bit, work around the traps and have a bit of fun till, well, whenever. Let’s call it “about 30″.

The adult stuff is things like getting married, getting a mortgage, having kids. So, it can happen from your mid, or even early, 20s. Or, equally, your late 30s or later.

The traditional life path is something like meet someone, get married, buy a home, have a few kids, upgrade home or renovate, maybe start some investing, possibly an investment property.

This is all on the “way up” the curve.

Each time you go through one of these life events, you are making a bigger and bigger financial commitment to each other (or yourself).

Ten years into a relationship and you could have $1 million-plus of debt across home and an investment, two kids under five that need to be raised to 21.

Like our mum in the intro, not being insured should terrify some people.

The good news is that insurance for most people in their 20s, 30s and 40s is pretty cheap. Insurance tends to get expensive from about age 50 onwards, when the risks of “events” happening start rising sharply. (And some of your insurance needs can potentially be funded through superannuation.)

You generally need loads of insurance at this stage. And for those that have the nightmare, that’s a good thing. It’s not too late. Do some reading, or go and get some advice.

The peak. This is nothing like reaching the top of a mountain, where it’s usually fairly peaceful. This is the top where it’s the craziest, busiest, time of your life.

It’s that time that roughly sits around age 50.

Your kids are roughly 15. You’ve done the hard yards and tough love to get them to be the entitled, rude, selfish teenagers that you see at weird times, or when they want something. Or they just appear at the fridge and pantry.

(Yes, I’ve got two teenagers in the house. They’re not that bad, to be fair. But Holy Toledo, they pack a special grief punch every now and then.)

You’ve still got a bunch of years to support them at school and possibly university, or early in their working life when they’re earning peanuts (which is all little monkeys deserve).

It’s not just the expense of kids. Professionally, this is usually “peak earnings”. On average, you’re at the peak of your game. The stats show that by 55, average incomes are falling.

And it’s also “peak debt”. You might have upgraded to a new home and loan, done a major renovation, bought an investment property or two, or hocked yourself into a business and are madly trying to control the debt.

For singles, an accident or illness would also leave your future in tatters. You’ve made big plans.

This is the peak potential disaster period. If something goes wrong (accident or illness), or someone ain’t around no more, imagine the carnage.

SKIING DOWN THE SLOPE

The kids turn 18, then 21. Your home loan is rapidly diminishing. The equity in your home and investments are increasing at a clip.

Your superannuation, out of nowhere, now seems to have porked on a bit of weight.

You might still have significant debt, but if you’ve done the right things along the way, rising net wealth means you wouldn’t be leaving a minefield to your partner if you were to, crudely, snuff it.

And, you’ve noticed in recent years, the cost of your insurances has been going on a gallop.

It doesn’t mean that you’ve made it and you just go out and cancel all of your insurances. But given the rising equity and cost of insurance, this is definitely the stage where you consider reducing your insurances, over time.

Say you held $1.5 million of life insurance at “the peak” (above), when your net wealth (assets less debt) was $700,000. Five years later, equity has sprouted in many places. Chickens, roosting.

As you’re skiing down the slope to 60 or 65 and retirement, your needs for insurance should disappear quickly. It doesn’t magically happen overnight. Not sure if you’re at this point? Don’t guess. Get advice.

But there comes a period where if you’ve made smart money and investment choices over the years, your insurance needs are evaporating.

And if you didn’t do the right thing financially, or had some bad luck along the way, you might be the exception that needs to hold your insurance for longer.

Putting thought into your insurance needs, up the hill, at its peak and down the other side will stave off more than just nightmares.