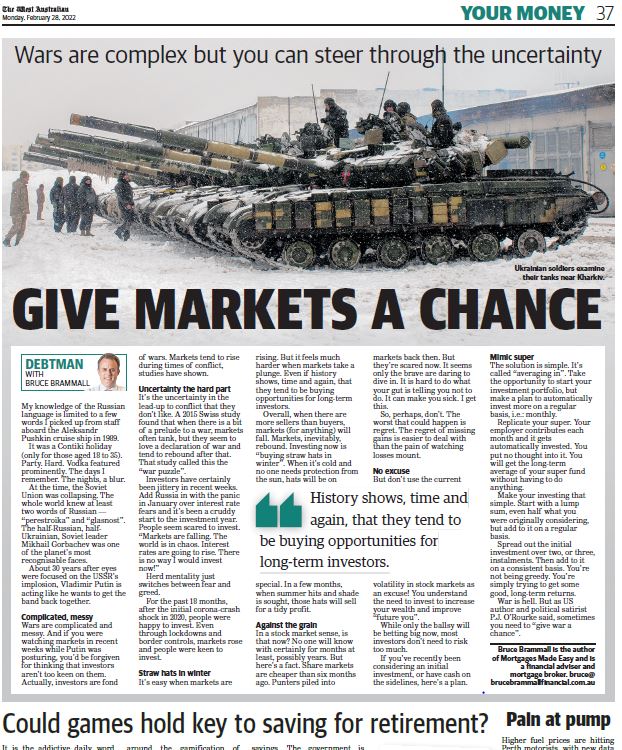 My knowledge of Russian is limited to a few words I picked up from staff aboard the Aleksandr Pushkin cruise ship in 1989.

It was a Contiki holiday – only for those aged 18 to 35. Party. Hard. Stolichnaya vodka featured prominently. The days I remember. The nights, a blur.

At the time, the Soviet Union was collapsing. The whole world knew at least two words of Russian – “perestroika” and “glasnost”. The half-Russian, half-Ukrainian Soviet leader Mikhail Gorbachev was one of the planet’s most recognisable faces.

About 30 years after eyes were focussed on the USSR’s implosion, Vladimir Putin is acting like he wants to get the band back together.

Wars are complicated and messy. And if you were watching markets in recent weeks while Putin was posturing, you’d be forgiven for thinking that investors aren’t too keen on them.

Actually, investors are fond of wars. Markets tend to rise during times of conflict, studies have shown.

It’s the uncertainty in the lead-up to conflict that they don’t like.

A 2015 Swiss study found that when there is a bit of a prelude to a war, markets often tank, but they seem to love a good declaration of war and tend to rebound after that. That study called this the “war puzzle”.

Investors have certainly been jittery of late. Add Russian in with the panic over interest rate fears and it’s been a cruddy start to the investment year.

People seem scared to invest. “Markets are falling. The world is in chaos. Interest rates are going to rise. There is no way I would invest now!”

For the past 18 months, after the initial Corona-crash shock in 2020, people were happy to invest. Even through lockdowns and state border controls, markets rose and people were keen to invest.

It’s easy when markets are rising.

But it feels so much harder when markets take a plunge. Even if history shows, time and again, that they tend to be buying opportunities for long-term investors.

Overall, when there are more sellers than buyers, markets (for anything) will fall. Markets, inevitably, rebound.

Investing now is “buying straw hats in winter”. When it’s cold and no-one needs protection from the sun, hats will be on special. In a few months, when summer hits and shade is sought, those hats will sell for a tidy profit.

In a stockmarket sense, is that now?

No-one will know with certainty for months at least, possibly years.

But here’s a fact. Share markets are cheaper than six months ago. Punters piled into markets back then. But they’re scared now. It seems only the brave are daring to dive in.

It is hard to do what your gut is telling you not to do. It can make you sick. I get it.

So, perhaps, don’t. The worst that could happen is regret. The regret of missing gains is easier to deal with than the pain of watching losses mount.

But don’t use the current volatility in stock markets as an excuse, or I’ll glass you!

You understand the need to invest to increase your wealth and improve “Future You”.

While only the ballsy will be betting big now, most investors don’t need to risk too much.

If you’ve recently been considering an initial investment, or have cash on the sidelines, here’s a plan.

The solution is simple. It’s called “averaging in”.

Take the opportunity to start your investment portfolio, but make a plan to automatically invest more on a regular basis, ie, monthly.

Replicate your super. Your employer contributes each month and it gets automatically invested. You put no thought into it. You will get the long-term average of your super fund without having to do anything.

Make your investing that simple. Start with some sort of a lump sum, even half what you were originally considering, but add to it on a regular basis.

Spread out the initial investment over two, or three, instalments. Then add to it on a consistent basis. You’re not being greedy. You’re simply trying to get some good, long-term returns.

War is hell. But in honour of the recent death of my favourite author, American political satirist PJ O’Rourke, sometimes you need to “Give War A Chance”.