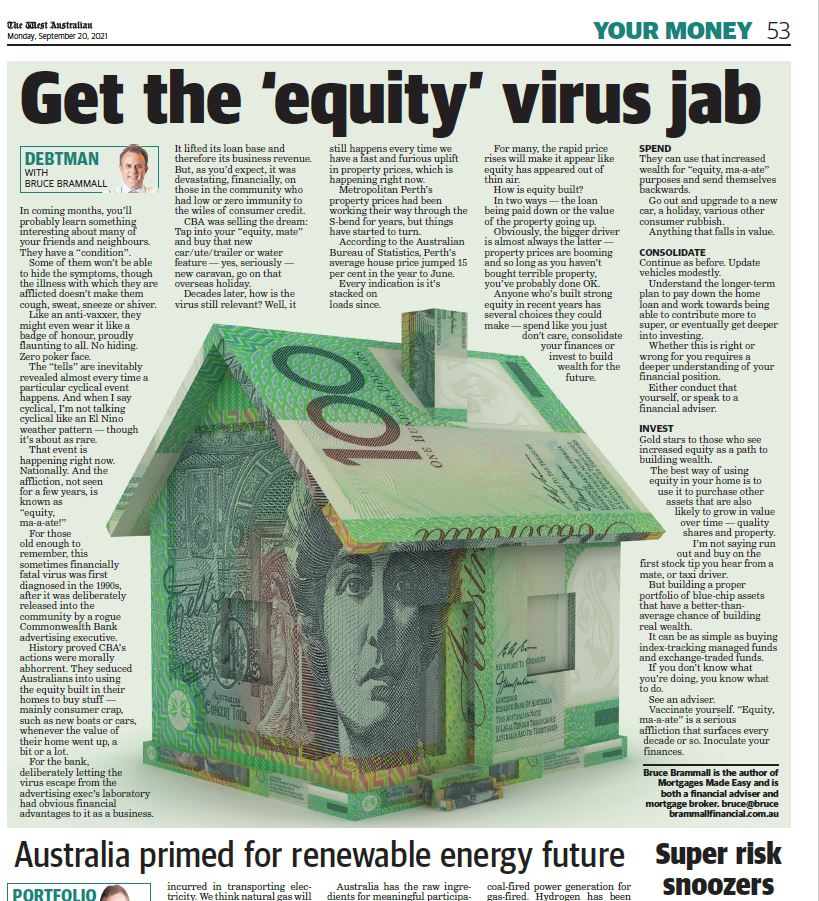 In the coming months, you’ll probably learn something interesting about many of your friends and neighbours. They have a “condition”.

Some of them won’t be able to hide the symptoms, though the illness with which they are afflicted doesn’t make them cough, sweat, sneeze or shiver.

The “tells” are inevitably revealed almost every time a particular cyclical event happens. And when I say cyclical, I’m not talking cyclical like an “el nino” weather pattern, though it’s about as rare.

And the affliction, not seen for a few years, is known as … “Equity Ma-a-ate!”

For those old enough to remember, this sometimes financially fatal virus  known as “Equity Ma-a-ate!” was first diagnosed in the 90s, after it was deliberately released into the community by a rogue Commonwealth Bank advertising executive.

History proved CBA’s actions were morally abhorrent. They seduced Australians into using the equity built in their homes to buy stuff, largely consumer crap, such as new boats or cars, whenever the value of their home went up, a bit or a lot.

For the bank, deliberately letting the EM virus escape from the advertising exec’s laboratory had obvious financial advantages to them as a business. It lifted their loan base and therefore their business revenue. But, as you’d expect, it was devastating, financially, on those in the community who had low or zero immunity to the guiles of consumer credit.

It might sound extreme, but CBA were no better than drug dealers offering free heroin to get their clients hooked.

Hahahaaa! Actually, that is a bit too far. But a little bit funny. And I think CBA are still secretly ashamed of letting the virus escape the lab …

CBA was selling the dream: “Tap into your ‘equity, mate’ and buy that new car/ute/trailer, or water feature (yes! Seriously!), new caravan, go on that overseas holiday.”

Mmmm. An overseas holiday. That would be nice …

Decades later, how is the EM virus still relevant? Well, it still happens every time we have a fast and furious uplift in property prices.

Metropolitan Perth’s property prices had been working its way through the S-bend for years, but things have started to turn.

According to Bureau of Statistics, the average house price in Australia jumped 16.7 per cent in the year June. Every indication is that it’s stacked on loads more since.

For many, the rapid property price rises will make it appear like equity has appeared out of thin air.

How is equity built? In two ways. The loan being paid down, or the value of the property going up.

Obviously, the bigger driver is almost always the latter – property prices are BOOMING and so long as you haven’t bought terrible property, you’ve probably done okay.

Anyone who’s built strong equity in recent years has several choices they could make. They can be summed up as: spend like you just don’t care; consolidate your finances, or; invest to build wealth for the future.

They can use that increased wealth for “Equity Ma-a-ate” purposes and send themselves backwards.

Go out and upgrade to a new car, a holiday, various other consumer rubbish. Anything that falls in value.

Continue as before. Update vehicles modestly. Understand the longer-term plan to pay down the home loan and work towards being able to contribute more to super, or eventually get deeper into investing.

Whether this is right or wrong for you requires a deeper understanding of your financial position. Either conduct that yourself, or speak to a financial adviser about.

Gold stars to those who see increased equity as a path to building wealth.

The best way of using equity in your home is to use it to purchase other assets that are also likely to grow in value over time – quality shares and property.

I’m not saying to run out and buy on the first stock tip you hear from a mate, or taxi driver. But building a proper portfolio of blue-chip assets that have a better than average chance of building real wealth.

It can be as simple as buying index-tracking managed funds and exchange-traded funds. If you don’t know what you’re doing … you know what to do. See an adviser.

Vaccinate yourself. Equity Ma-a-ate is a serious affliction that surfaces every decade or so. Innoculate your finances.