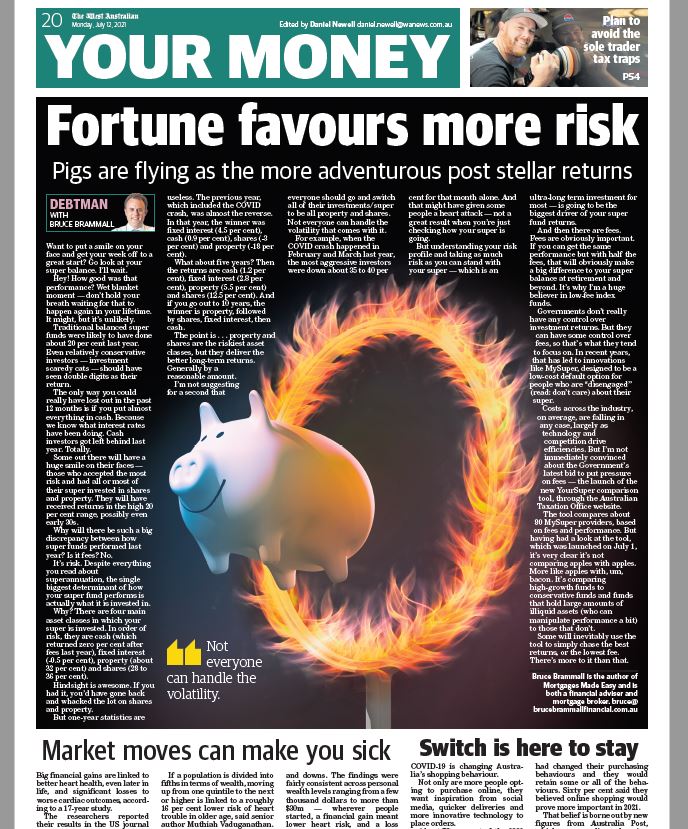 Want to put on a smile? Go look at your super balance. I’ll wait.

Hey! How good was that performance?

Wet blanket moment: Don’t hold your breath waiting for that to happen again in your lifetime. It might, but it’s unlikely.

Traditional balanced super funds were likely to have done around 20 per cent last year.

Even relatively conservative investors – investment scaredy cats – should have seen double digits as their return.

The only way you could really have lost out in the last 12 months is if you almost everything in cash. Because we know what interest rates have been doing. Cash investors got left behind last year. Totally.

Some out there will have a huge smile on their faces – those who accepted the most risk and all or most of their super invested in shares and property.

They will have received returns in the high 20 per cent range, possibly even early 30s.

Why will there be such a big discrepancy between how super funds performed last year?

It’s risk. Despite everything you read about superannuation, the single biggest determinant of how your super fund performs is actually what it is invested in.

Why? There are four main asset classes in which your super is invested. In order of risk, they are cash (which returned 0 per cent after fees last year), fixed interest (-0.5 per cent), property (about 32 per cent) and shares (28-36 per cent).

Hindsight is awesome. If you had it, you’d have gone back and whacked the lot on shares and property.

But one year statistics are useless. The previous year, which included the Corona crash, was almost the reverse. In that year, the winner was fixed interest (4.5 per cent), cash (0.9 per cent), shares (-3 per cent) and property (-18 per cent).

The point is … property and shares are the riskiest asset classes, but they deliver the better long-term returns. Generally by a reasonable amount.

I’m not suggesting, for a second, that everyone should go and switch all of their investments/super to be all property and shares. Not everyone can handle the volatility that comes with it.

For example, when the Corona crash happened in February-March last year, the most aggressive investors were down around 35-40 per cent for that month alone. And that might have given some people a heart attack – not a great result when you’re just checking how your super is going.

But understanding your risk profile and taking as much risk as you can stand with your super – which is an ultra-long term investment for most – is going to be the biggest driver of your super fund returns.

And then there are fees.

Fees are obviously important. If you can get the same performance but with half the fees, that will obviously make a big difference to your super balance at retirement and beyond. It’s why I’m a huge believer in low-fee index funds.

Governments don’t really have any control over investment returns. But they can have some control over fees, so that’s what they tend to focus on.

In recent years, that has led to innovations like MySuper, designed to be a low-cost default option for people who are “disengaged” (read: don’t care) about their super.

Costs across the industry, on average, are falling in any case, largely as technology and competition drive efficiencies.

But I’m not immediately convinced about the Government’s latest bid to put pressure on fees – the launch of the new YourSuper Comparison tool, through the Tax Office website.

The tool compares about 80 MySuper providers, based on fees and performance.

But having had a look at the tool, which was launched on 1 July, it’s very clear it’s not comparing apples with apples. More like apples with, um, bacon.

It’s comparing high-growth funds to conservative funds and funds that hold large amounts of illiquid assets (who can manipulate performance a bit) to those that don’t.

Some will inevitably use the tool to simply chase the best returns, or the lowest fee. There’s a fair bit more to it than that.