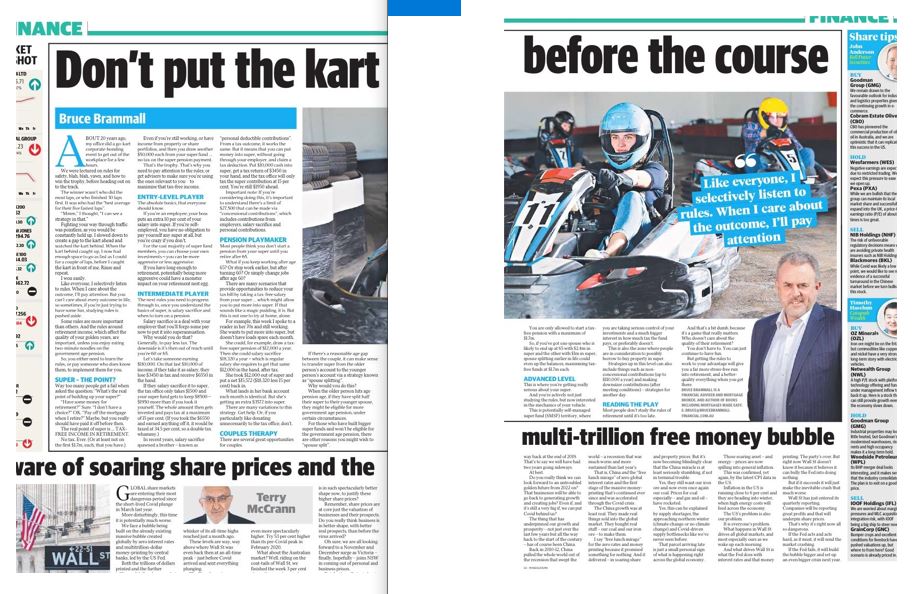 About 20 years ago, my office did a go-kart corporate bonding event, to get out of the workplace for a few hours.

We were lectured on rules for safety, blah, blah, yawn, and how to win the trophy, before heading out onto the track.

The winner wasn’t who did the most laps, or who finished 30 laps first. It was who had the “best average for their five fastest laps”. “Mmm,” I thought, “I can see a strategy in that.”

Fighting your way through traffic was pointless, as you would be constantly held up. I slowed down to create a gap to the kart ahead and watched the kart behind. When the kart behind caught up, I now had enough space to go as fast as I could for a couple of laps, before I caught the kart in front of me. Rinse and repeat.

Like everyone, I selectively listen to rules. When I care about the outcome, I’ll pay attention. But you can’t care about every outcome in life, so sometimes, if you’re just trying to have some fun, studying rules is pushed aside.

Some rules are more important than others. And the rules around retirement income, which affect the quality of your golden years, are important, unless you enjoy eating two-minute noodles on the government age pension.

So, you either need to learn the rules, or pay someone who does know them, to implement them for you.

Way too many people get a fail when asked the question: “What’s the real point of building up your super?”

“Have some money for retirement?” Sure. “I don’t have a choice?” Okay. “Pay off the mortgage when I retire?” Maybe, but you really should have paid it off before then.

The real point of super is … TAX-FREE INCOME IN RETIREMENT.

Even if you’re still working, or have income from property or share portfolios, and then you draw another $50,000 each from your super fund … no tax on the super pension payment.

That’s the trophy. That’s why you need to pay attention to the rules, or get advisers to make sure you’re using the ones relevant to you – to maximise that tax-free income.

The absolute basics, that everyone should know.

If you’re an employee, your boss puts an extra 10 per cent of your salary into super. If you’re self-employed, you have no obligation to pay yourself any super at all, but you’re crazy if you don’t.

For the vast majority of super fund members, you can choose your own investments – you can be more aggressive or less aggressive.

If you have long enough to retirement, potentially being more aggressive could have a monster impact on your retirement nest-egg.

The next rules you need to progress through to, once you understand the basics of super, is salary sacrifice and when to turn on a pension.

Salary sacrifice is a deal with your employer that you’ll forgo some pay now to put it into superannuation.

Why would you do that? Generally, to pay less tax. The downside is it’s then out of reach until you’re 60 or 65.

The whole amount then gets invested and pays tax at a maximum of 15 per cent. (If you took the $6550 and earned anything off it, it would be taxed at 34.5 per cent, so a double tax whammy.)

In recent years, salary sacrifice spawned a brother – known as “personal deductible contributions”. From a tax outcome, it works the same. But it means that you can put money into super, without going through your employer, and claim a tax deduction. Put $10,000 cash into super, get a tax return of $3450 in your hand and the tax office will only tax the super contribution at 15 per cent. You’re still $1950 ahead.

Important note: If you’re considering doing this, it’s important to understand there’s a limit of $27,500 that can be made via “concessional contributions”, which includes contributions from employers, salary sacrifice and personal contributions.

Most people think you don’t start a pension from your super until you retire after 65.

What if you keep working after age 65? Or stop work earlier, but after turning 60? Or simply change jobs after age 60?

There are many scenarios that provide opportunities to reduce your tax bill by taking a tax-free salary from your super … which might allow you to put more into super.

If that sounds like a magic pudding, it is. But this is not one to try at home, alone.

For example, this week I spoke to a reader in her 70s and still working. She wants to put more into super, but doesn’t have loads spare each month.

What’s lands in her bank account each month is identical. But she’s getting an extra $3572 into super.

There are many variations to this strategy. Get help. Or, if you particularly like donating unnecessarily to the tax office, don’t.

There are several great opportunities for couples.

Why would you do this? When the older person hits age pension age, if they have split half their super to their younger spouse, they might be eligible for more government age pension, under certain circumstances.

For those who have built bigger super funds and won’t be eligible for the government age pension, there are other reasons you might wish to “spouse split”.

You are only allowed to start a tax-free pension with a maximum of $1.7 million.

So, if you’ve got one spouse who is likely to end up at 65 with $2.4m in super and the other with $1 million in super, spouse splitting earlier in life could even up the balances, maximising tax-free funds at $1.7 million each.

This is where you’re getting really serious about your super. And you’re actively not just studying the rules, but now interested in the mechanics of your vehicle.

This is potentially self-managed super fund (SMSF) territory, where you are taking serious control of your investments and a much bigger interest in how much tax the fund pays, or preferably doesn’t. This is also the zone where people are in consideration to possibly borrow to buy property in super.

Strategies up in this level can also include things such as non-concessional contributions (up to $110,000 a year) and making downsizer contributions (after meeting conditions) – strategies for another day.

Most people don’t study the rules of retirement, until it’s too late. And that’s a bit dumb, because it’s a game that really matters. Who doesn’t care about the quality of their retirement?

You don’t have to. You can just continue to have fun. But getting the rules to work to your advantage will give you a far more stress-free run into retirement, and a better quality everything when you get there.