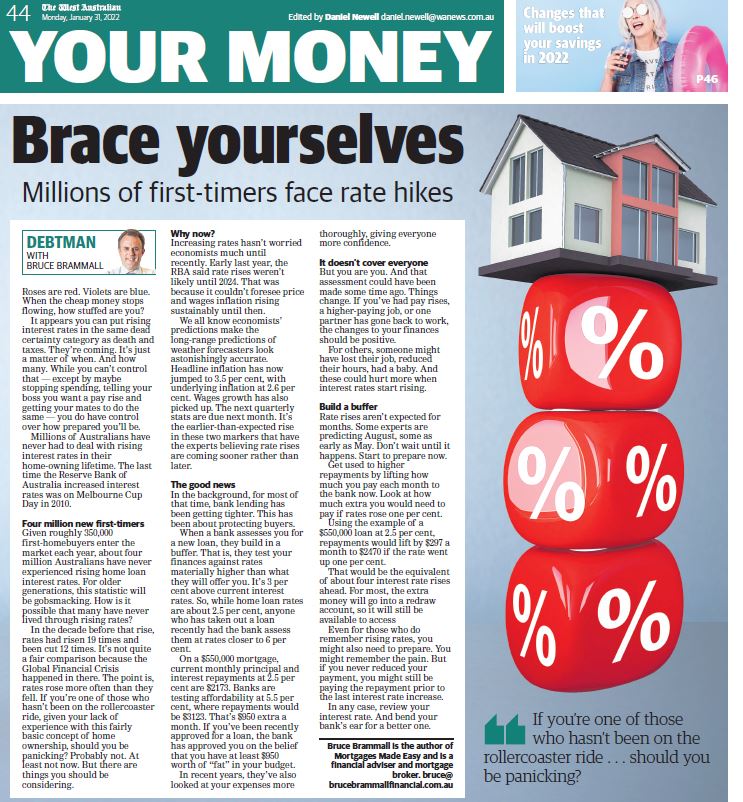 Roses are red. Violets are blue. When the cheap money stops flowing, how stuffed are you?

It appears you can put rising interest rates in the same “dead certainty” category as death and taxes.

They’re coming. It’s just a matter of when. And how many.

While you can’t control that – except by maybe stopping spending, telling your boss you want a pay cut and getting your mates to do the same – you do have control over how prepared you’l be.

Millions of Australians have never had to deal with rising interest rates in their home-owning lifetimes.

The last time the Reserve Bank increased interest rates in Australia was on Melbourne Cup Day, 2010.

For older generations, this statistic will be gobsmacking. How is it possible that many have never lived through rising rates?

In the decade before that rate rise, rates had risen 19 times and been cut 12 times. It’s not quite a fair comparison, because the Global Financial Crisis happened in there.

The point is, rates rose more often than they fell.

If you’re one of them, given your lack of experience with this fairly basic concept of home ownership, should you be panicking?

Probably not. At least not now. But there are things you should be considering.

Early last year, the Reserve Bank said rate rises weren’t likely until 2024. That was because they couldn’t foresee price and wages inflation rising sustainably until then.

Headline inflation has now jumped to 3.5 per cent, with underlying inflation at 2.6 per cent. Wages growth has picked up also.

It’s the earlier than expected rise in these two markers that have the experts believing rate rises are sooner rather than later.

In the background, for most of that time, bank lending has been getting tighter. This has been about protecting buyers.

When a bank assesses you for a new loan, they build in a buffer. That is, they test your finances against rates materially higher than what they will offer you.

They test you at 3 per cent above current interest rates.

So, while home loan rates are about 2.5 per cent, anyone who has taken out a loan recently had the bank assess them at rates closer to 6 per cent.

That’s $950 a month. If you’ve been recently approved for a loan, the bank has approved your loan in the belief that you have at least $950 worth of “fat” in your budget.

But you’re you. And that assessment could have been made some time ago. Things change.

If you’ve had pay rises, a higher-paying job, or one has gone back to work, the changes to your home finances should be positive.

For others, someone might have lost their job, reduced their hours, had a baby. And these could hurt more when interest rates start rising.

Rate rises aren’t expected for months. Some experts are predicting August, some as early as May.

Don’t wait until it happens. Start to prepare your finances. Now.

Get used to higher repayments by lifting how much you pay each month to the bank now. Look at how much extra you would need to pay if rates rose 1 per cent.

In the example above, repayments would lift by $297 a month to $2470. That would put you the equivalent of about four interest rate rises ahead.

(For most, that will go into a redraw account, so it will still be available.)

Even for those who do remember rising rates, you might also need to prepare. You might remember the pain. But if you never reduced your payment, you might still be paying the repayment prior to the last interest rate increase.

In any case, review your interest rate. And bend your bank’s ear for a better one.