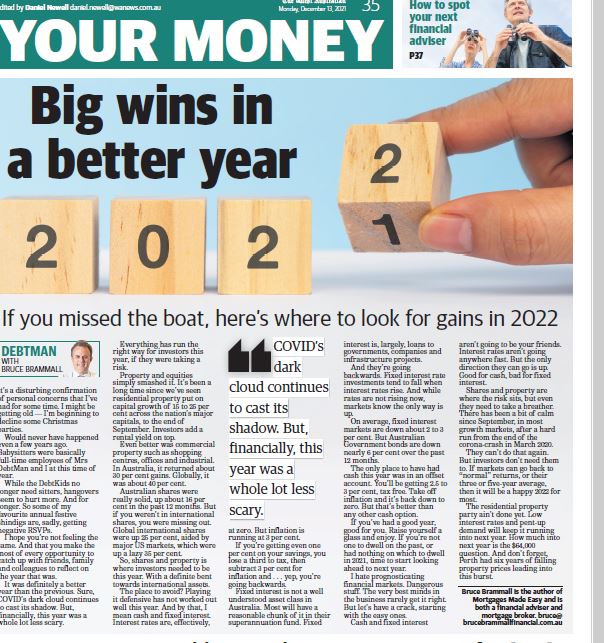 It’s a disturbing confirmation of personal concerns that I’ve had for some time. I might be getting old – I’m beginning to decline some Christmas parties.

Would never have happened even a few years ago. Babysitters were basically full-time employees of Mrs DebtMan and I at this time of year.

While the DebtKids no longer need sitters, hangovers seem to hurt more. And for longer. So, some of my favourite annual festive shindigs are, sadly, getting negative RSVPs.

I hope you’re not feeling the same. And that you make the most of every opportunity to catch up with friends, family and colleagues to reflect on the year that was.

It was definitely a better year than the previous.

Sure, Covid’s dark cloud continues to cast its shadow. But, financially, this year was a whole lot less scary.

Everything has run the right way for investors this year, if they were taking a risk.

Property and equities simply smashed it.

It’s been a long time since we’ve seen residential property put on capital growth of 15-25 per cent across the nation’s major capitals (to the end of September). Investors add a rental yield on top.

Even better was commercial property, such as shopping centres, offices and industrial. In Australia, it returned about 30 per cent gains. Globally, about 40 per cent.

So, shares and property is where investors needed to be this year. With a definite bent towards international assets.

The place to avoid? Playing it defensive has not worked out well this year. And by that, I mean cash and fixed interest.

Interest rates are, effectively, at zero. But inflation is running at 3 per cent.

If you’re getting even 1 per cent on your savings, you lose a third to tax, then subtract 3 per cent for inflation and … yep, you’re going backwards.

Fixed interest is not a well understood asset class in Australia. Most will have a reasonable chunk of it in their super fund. Fixed interest is, largely, loans to governments, companies and infrastructure projects.

And they’re going backwards. Fixed interest rate investments tend to fall when interest rates rise. And while rates are not rising now, markets know the only way is up.

On average, fixed interest markets are down around 2-3 per cent. But Australian Government bonds are down nearly 6 per cent over the last 12 months.

The only place to have had cash this year was in an offset account. You’ll be getting 2.5 to 3 per cent, tax free. Take off inflation and it’s back down to zero. But that’s better than any other cash option.

If you’ve had a good year, good for you. Raise yourself a glass and enjoy.

If you’re not one to dwell on the past, or had nothing on which to dwell in 2021, time to start looking ahead to next year.

I hate prognosticating financial markets. Dangerous stuff. The very best minds in the business rarely get it right.

But let’s have a crack, starting with the easy ones. Cash and fixed interest aren’t going to be your friends. Interest rates aren’t going anywhere fast. But the only direction they can go is up. Good for cash, bad for fixed interest.

Shares and property are where the risk sits, but even they need to take a breather. There has been a bit of calm since September, in most growth markets, after a hard run from the end of the Coronacrash in March 2020That had been an utterly staggering 18 months.

They can’t do that again. But investors don’t need them to. If markets can go back to “normal” returns, or their three- or five-year average, then it will be a happy 2022 for most.

The residential property party ain’t done yet. Low interest rates and pent-up demand will keep it running into next year. How much into next year is the $64 question.

Best wishes to you all for a great Christmas holidays. See you in the new year.