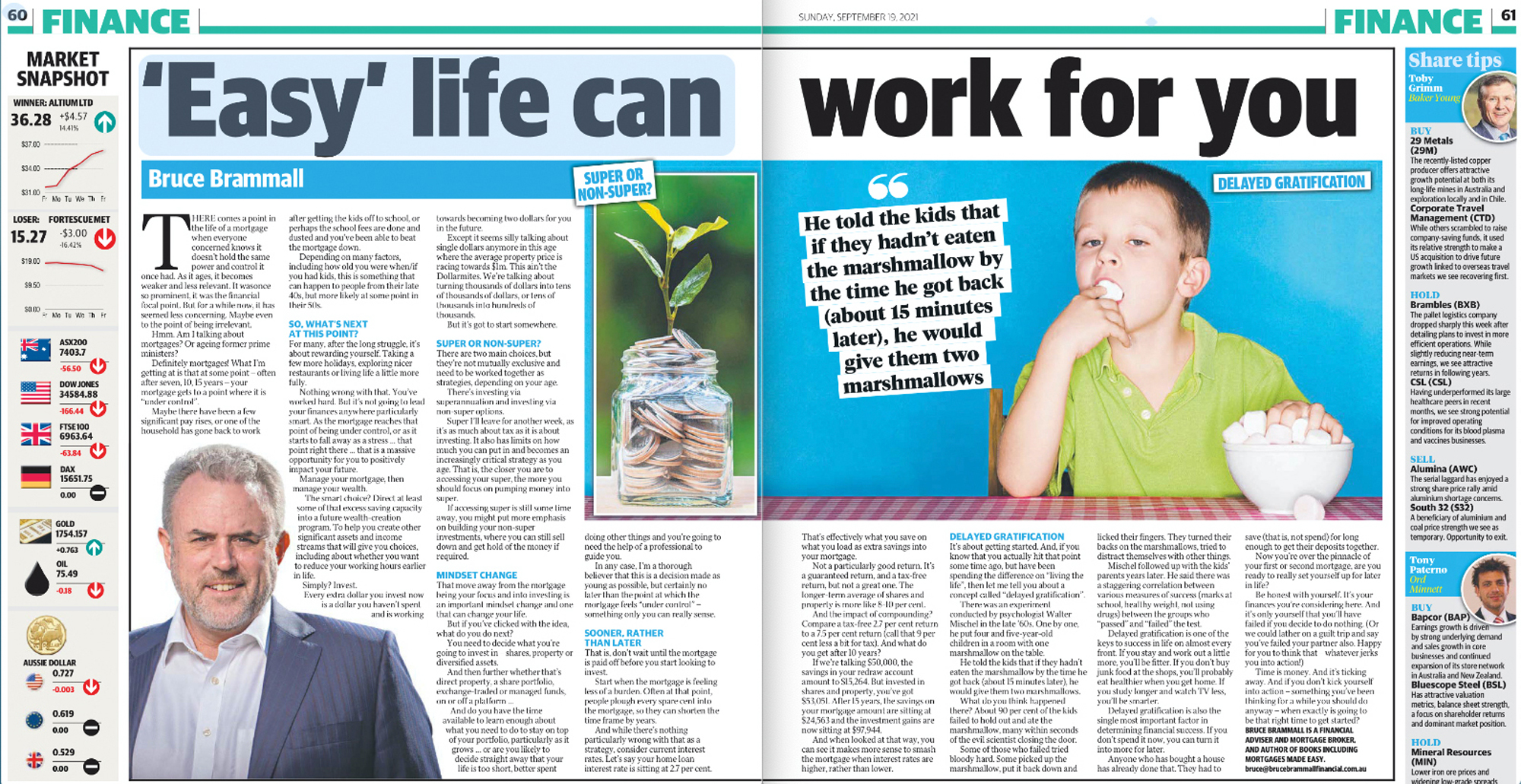 There comes a point in the life of a mortgage where everyone concerned knows it doesn’t hold the same power and control it once had.

As it ages, it becomes weaker and less relevant. It was once so prominent, it was the financial focal point. But for a while now, it has seemed less concerning. Maybe even to the point of being irrelevant.

Hmm. Am I talking about mortgages? Or ageing former prime ministers?

Definitely mortgages! What I’m getting at is that at some point – often after 7, 10, 15 years – your mortgage gets to a point where it is “under control”.

Maybe there have been a few significant payrises, or one of the household has gone back to work after getting the kids off to school, or perhaps the school fees are done and dusted and you’ve been able to beat the mortgage down for a few years.

Depending on many factors, including how old you were when/if you had kids, this is something that can happen to people from their late 40s, but more likely at some point in their 50s.

So, what’s next at this point?

For many, after the long struggle, it’s about rewarding yourself. Taking a few more holidays, exploring nicer restaurants or living life a little more fully.

Nothing wrong with that. You’ve worked hard. But it’s not going to lead your finances anywhere particularly smart.

As the mortgage reaches that point of being under control, or as it starts to fall away as a stress … that point right there … that is a massive opportunity for you to positively impact your future.

The smart choice? Direct at least some of that excess saving capacity into a future wealth-creation program. To help you create other significant assets and income streams that will give you choices, including about whether you want to reduce your working hours, earlier in life.

Every extra dollar you invest now is a dollar you haven’t spent and is something working towards becoming two dollars for you in the future.

But it’s got to start somewhere.

There are two main choices, but they’re not mutually exclusive and need to be worked together as strategies, depending on your age.

Super I’ll leave for another week, as it’s as much about tax as it is about investing. It also has limits on how much you can put in and becomes increasingly critical strategy as you age. That is, the closer you are to accessing your super, the more you should focus on pumping money into super.

If accessing super is still some time away, you might put more emphasis on building your non-super investments, where you can still sell down and get hold of the money, if required.

That move away from the mortgage being your focus and into investing is an important mindset change to make and one that can change your life.

But if you’ve clicked with the idea, what do you do next?

You need to decide what you’re going to invest in – shares, property or diversified assets. And then further whether that’s direct property, a share portfolio, exchange-traded or managed funds, on or off a platform …

And do you have the time available to learn enough about what you need to do to stay on top of your portfolio, particularly as it grows … or are you likely to decide straight away that your life is too short, better spent doing other things and you’re going to need the help of a professional to guide you.

In any case, I’m a thorough believer that this is a decision made as young as possible, but certainly no later than the point at which the mortgage feels “under control” – something only you can really sense.

Sooner, rather than later

That is, don’t wait until the mortgage is paid off before you start looking to invest.

Start when the mortgage is feeling less of a burden. Often, at that point, people plough every spare cent into the mortgage, so they can shorten the time frame by years.

And while there’s nothing particularly wrong with that as a strategy, consider current interest rates.

Let’s say your home loan interest rate is sitting at 2.7 per cent. That’s effectively what you save on what you load as extra savings into your mortgage.

Not a particularly good return. It’s a guaranteed return, and a tax-free return, but not a great one.

The longer-term average of shares and property is more like 8-10 per cent.

And when looked at that way, you can see it makes more sense to smash the mortgage when interest rates are higher, rather than lower.

It’s about getting started. And, if you know that you actually hit that point some time ago, but have been spending the difference on “living the life”, then let me tell you about a concept called “delayed gratification”.

There was an experiment conducted by psychologist Walter Mischel in the late 60s. One by one, he put 4- and 5-year-old children in a room with one marshmallow on the table.

He told the kids that if they hadn’t eaten the marshmallow by the time he got back (about 15 minutes later), he would give them two marshmallows.

What do you think happened there? About 90 per cent of the kids failed to hold out and ate the marshmallow, many within seconds of the evil scientist closing the door.

Some of those that failed tried bloody hard. Some picked up the marshmallow, put it back down and licked their fingers. They turned their backs on the marshmallows, tried to distract themselves with other things.

Mischel followed up with the kids’ parents years later. He said there was a staggering correlation between various measures of success (marks at school, healthy weight, not using drugs) between the groups who “passed” and “failed” the test.

Delayed gratification is one of the keys to success in life on almost every front. If you stay and work out a little more, you’ll be fitter. If you don’t buy junk food at the shops, you’ll probably eat healthier when you get home. If you study longer and watch TV less, you’ll be smarter.

Delayed gratification is also the single most important factor in determining financial success. If you don’t spend it now, you can turn it into more for later.

Anyone who has bought a house has already done that. They had to save (that is, not spend) for long enough to get their deposit together.

Now you’re over the pinnacle of your first or second mortgage, are you ready to really set yourself up for later in life?

Be honest with yourself. It’s your finances you’re considering here. And it’s only yourself that you’ll have failed if you decide to do nothing. (Or we could lather on a guilt trip and say you’ve failed your partner also. Happy for you to think that – whatever jerks you into action!)

Time is money. And it’s ticking away. And if you don’t kick yourself into action – something you’ve been thinking for a while you should do anyway – when exactly is going to be that right time to get started?