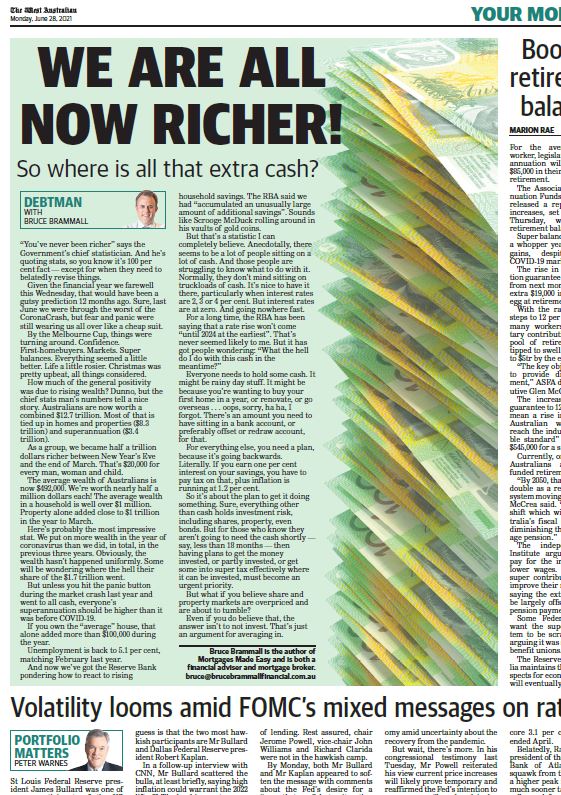 “You’ve never been richer” says the Government’s chief statistician. And he’s quoting stats, so you know it’s 100 per cent fact.

(Oh, except for when they need to belatedly revise things.)

Given the financial year we farewelled last month, that would have been a gutsy prediction 12 months ago. Sure, last June we were through the worst of the Corona crash, but fear and panic were still wearing us all over like a cheap suit.

How much of the general positivity was due to rising wealth? Dunno, but the chief stats man’s numbers tell a nice story.

Australians are now worth a combined $12.7 trillion. Most of that is tied up in homes and properties ($8.3 trillion) and superannuation ($3.4 trillion).

As a group, we became half a trillion dollars richer, between New Year’s Eve and the end of March. That’s $20,000 for every man, woman and child.

Property alone added close to a trillion dollars in the year to March.

Here’s probably the most impressive stat. We put on more wealth in the year of Corona than we did, in total, in the previous three years.

Obviously, the wealth hasn’t happened uniformly. Some will be wondering where the hell their share of the $1.7 trillion went.

But unless you hit the panic button during the market crash last year and went to all cash, everyone’s superannuation should be higher than it was before Covid-19.

And stupendously higher than where it was on 31 March 2020, just after the bottom of the market, which is the start mark for the current stats.

Unemployment is back to 5.1 per cent, matching February last year.

And now we’ve got the Reserve Bank pondering how to react to rising household savings. The RBA said we had “accumulated an unusually large amount of additional savings”. Sounds like Scrooge McDuck rolling around in his vaults of gold coins.

But that’s a statistic I can completely believe. Anecdotally, there seems to be a lot of people sitting on a lot of cash.

And those people are struggling to know what to do with it.

Normally, they don’t mind sitting on truckloads of cash. It’s nice to have it there, particularly when interest rates are 2, 3 or 4 per cent.

But interest rates are at zero. And going nowhere fast.

For a long time, the RBA has been saying that a rate rise won’t come “until 2024 at the earliest”. That’s never seemed likely to me. But it mirrored roughly what their counterpart in the US, the Federal Reserve, was saying.

And that’s got people wondering: “What the hell do I do with this cash in the meantime?”

Everyone needs to hold some cash. It might be rainy day stuff. It might be because you’re wanting to buy your first home in a year, or renovate, or go overseas … oops, sorry, hahaha, forgot.

There’s an amount you need to have sitting in a bank account (or preferably offset or redraw account) for that.

Everything else … you need a plan, because it’s going backwards. Literally. If you earn 1 per cent interest on your savings, you have to pay tax on that, plus inflation is running at 1.2 per cent.

So, it’s about the plan to get it doing something. Sure, everything other than cash holds investment risk, including shares, property, even bonds.

But for those who know they aren’t going to need the cash shortly (say, less than 18 months), then having plans to get the money invested, or partly invested, or get some into super tax effectively where it can be invested, must become an urgent priority.

But what if you believe share and property markets are overpriced and are about to tumble?

Even if you do believe that, the answer isn’t to not invest. That’s just an argument for averaging in.