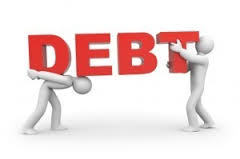 There is a group of people that, to the day I die, are going to confound me. But it’s mutual. I’ll never get them. And they’ll never understand me.

Those who believe that debt is the root of all evil, destroys lives and keeps the poor downtrodden. They believe all debt in life is intolerable and the world would be better without it. They seem to think that debt causes cancer, is melting the polar ice caps and killed Princess Diana.

Sometimes, they don’t really seem sure why. They just “don’t like it”.

Most recently, it was someone moaning that there is “no choice” but to take on debt. Debt, she said, had become “impossible to resist”. Debt has become an “obligation” on families.

What a load of horse manure!

Debt is a choice. Every bit of it.

Resisting debt requires a little willpower. Avoiding most debt will require a commitment to saving. No one – not the car salesman or the furniture sales assistant – is holding a gun to your head.

Nor do you have to buy a home. Honestly, you don’t. Many people live long and happy lives as non-homeowners. You can rent forever. There are these people, see, called “property investors”, who will happily let you rent one of their properties, potentially for the rest of your life.

Personally, I believe home ownership is the cornerstone of wealth creation. But you can choose a life of renting and make it work for you financially, if you have enough willpower to invest the difference.

You don’t have to take on debt, via credit cards. If you want to buy a toaster, wait until next week when you’ve saved an extra $50.

You don’t need to take on debt for investment. You can put your savings to work. (I don’t know too many people who have saved themselves to a fortune, but it certainly can be done, theoretically.)

Understand this about debt. It’s a tool. It’s purpose is to allow you to purchase things earlier. The option to “buy now, pay later” is a choice. You could, instead, “save now, buy later”.

Personally, I love debt. Not all of it. But the good bits – the bits that allow you to buy investments that will help create a better future for yourself and your family. Debt is awesome.

I wasn’t always like this. There was a time when I hated/feared debt.

I paid off the car loan in 13 months. And the HECS debt within three years of starting full-time work. A second car debt was similarly repaid in about 18 months. After that, I stayed debt free for many years.

But then I read a life-changing book. And I grew up.

For the first time, I’d had property as an investment properly explained. And I now understood why the debt used to buy investments was different to other debts.

It upended everything I’d learned about debt. Previously, I believed that you needed to sacrifice everything until a debt was paid off. Now I understood that debt, used correctly, could be used to create wealth.

Within two years, we’d bought three properties, one of which was a home.

It was a bit scary. We had a mountain of debt. We knew we were taking on considerable risks.

But, taking on the debt was our choice. As it is for millions of Australians. No-one was forcing us to do this. We were making informed decisions. Consenting adult stuff.

Hate/fear debt if you want. But, really, it’s just a tool that, used correctly, can help you achieve great things.

Debt is not an inescapable part of life. It’s a choice.