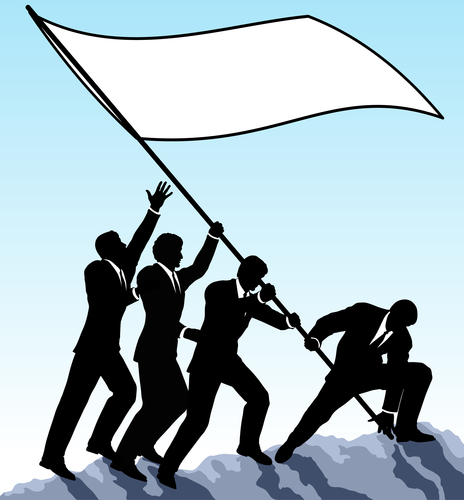 Raising the white flag, when I was a really young lad, meant “surrender”. Giving in. Admitting defeat.

It wasn’t until later that I learned it also meant a truce or ceasefire was being requested. Time to see if a negotiated settlement could replace hostilities.

We recently had to raise the white flag with DebtBoy. Combat wasn’t achieving much. Shouting, threats and pocketmoney penalties sunk in like water on a duck’s back – that is, not at all.

Things were teetering out of control and we needed an armistice. While not yet a teenager, some personality traits , if left unchallenged, were going to have me strangling him, just as Homer does Bart (“Why, you little!”).

The trait, simply, was lying. He was showing early, scary, signs of proficiency. A little bit Anakin Skywalker – a young man with supernatural skills, needing to be pushed toward the light side before he turned all Darth Vader.

Where his father lies for fun (because Mrs DebtMan is crazy gullible and the laughs can be shared around the household), DebtBoy was using his heriditary gift for evil. To tell porkies to his parents.

Mrs DebtMan and I were pulling each other’s hair out, during considerable disagreements on how to deal with it. We eventually had a chat with a professional. She outlined a plan. And offered to do a few sessions with him.

Two sessions in with Melonie, our own child whisperer and … wow … wish we’d done it earlier. Something has changed. We’re making fewer threats. Shouting less. Just when we think we’re about to start to lose it, DebtBoy surprises us with an unexpected Mel-inspired response.

Shouting matches with, and about, DebtBoy are down significantly. Stress, therefore, is too.

First: “The definition of insanity is doing the same thing over and over and expecting different results.” Second: “If you think it’s expensive to hire a professional, wait until you hire an amateur.”

When it comes to many parts of your life, accept you’re an amateur. And doing what you’ve always done ain’t going to improve things any faster than they have already.

You’ll either continue to do a half-arsed job, or you’ll take an extraordinary amount of time to do it nearly as well as a professional would have done it in a tenth of the time.

Some come to accept this. Like me. I have embraced my tragic lack of talent as a DIY handyman. I’ve got a guy. I save up the jobs and get him over a few times a year.

I’ve also got a tax guy, a cleaning couple, several property guys and gals. And an awesome team at my office, who run parts of our processes much better than I ever could.

With DebtBoy, we were going through our version of insanity. The same stuff, day after day, expecting it to magically work. Kidding ourselves.

Our child whisperer wasn’t cheap. But look at the results. We’d had YEARS! So far, she’s had two hours.

You know where this is heading.

There are plenty of areas in your life where you’re the amateur. (And it might include parenting.)

If you’re honest, it might also include your finances. You might be banging your head against a brick wall, or butting heads with your partner, all to end up in the same spot, or a worse spot, than you were last year.

Even if you’re getting ahead, do you have any confidence that you’re really even half maximising what you’re doing?

Have you built a hotch-potch portfolio, with some dogs that are barking? Are you stuck on the sidelines in cash, lacking the courage or confidence to invest?

Do you know whether you should be pumping extra into the mortgage, or into super? (This will have more to do with your age than the size of your mortgage.)

Do you have a strategy for your super?

Did you succumb to a “a good idea at the time” that you’ve since accepted was pretty dumb decision?

Insurance. Is it something you know you need, but you’ve been putting it off, because it’s just too complex?

When you’re considering taking on a professional, it’s about a few things. It’s usually a mixture of the time saved and the better job done.

It’s okay. Wave the white flag. Lay down your guns. You’re calling a truce, not surrendering. Outsource to true professionals. It will almost always be a better solution.