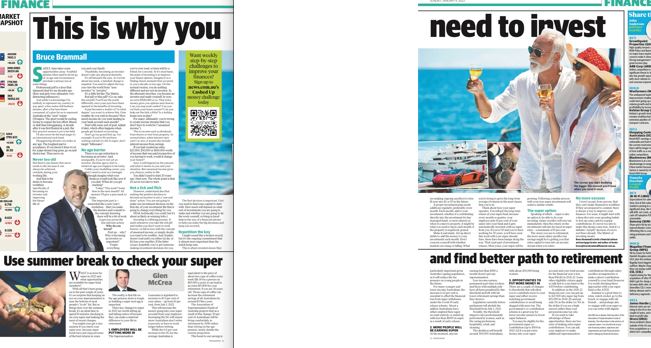 Sadly, time takes some opportunities away. Youthful dreams often need to be let go of, as age and circumstance preclude a serious run at some things.

Professional golf is a door that slammed shut for me decades ago. (Beer and girls were ultimately very distracting influences.)

And while I acknowledge I’m unlikely to represent my country in any sport, a few mates still harbour dreams, after a few have been consumed, of a plan for us to represent Australia at the “next” winter Olympics.

The sport would be curling. Seems to require far less effort, fitness or skill than tobogganing. A decade after it was first floated at a pub, the first practice session is yet to be held.

I’ll also never be the lead singer in an international rock band. My dream was cruelly culled by what my parents assured me was due to an affliction known as a “tragic lack of talent”, acquired at birth.

Disappearing dreams can strike at any age. The toughest part is acceptance. If you haven’t done it yet for a pipe dream long gone, go on and shed a tear. Then move on.

But there’s one dream that never needs to die, because it can always be achieved, certainly during your working life.

And that is the desire to become wealthier. Specifically of becoming an investor and improving the future life of you and your family.

It’s all between the ears. As I wrote about last week, a mindset change is required. You need to adjust the way you view the world from “non-investor” to “investor”.

Red pill or blue pill? (Go on, take the red pill.) You’ll see the world differently once your eyes have been opened to the benefits of investing.

It just becomes a matter of “to what degree” you want to achieve this. How wealthy do you wish to become? How much income do you want landing in your bank account each month?

Start with some sort of goal. Adjust it later, which often happens when people get hooked on investing.

Don’t go too grand first up. For example, if you’re 50 and have nothing outside of a bit in super, don’t target “billionaire”. Unless you’re intending on living and working to about 250.

There is no age restriction to becoming an investor. And, unarguably, if you’re not yet an investor, the best age to start is … whatever age you happen to be today.

Unlike your modelling career, you didn’t need to start as a teenager (though imagine what your finances would look like now if you did). When do you get cracking?

Today? This week? Some time in the next month? All answers I’ll give a pass mark to today.

The important part is – somewhat like a new year’s resolution – that you make the decision and commit to the concept, knowing there will be a bit of work to get you across the line and into action.

Why do you invest?

First up … why? Why is becoming an investor so important?

Forget everything you’ve ever read, or been told by a friend, for a second. At it’s most basic, the point of investing is to improve your future options.

Imagine it as a Sliding Doors moment that occurred to you a decade or two ago. On the normal version, you do nothing different and are not an investor. In the alternate storyline, you became an investor and made yourself, by now, an extra $500,000 or so.

That extra money gives you options and choices. Can you stop work earlier? Can you cut back your hours sooner? Can you help out the kids a little? Is a holiday home now in play?

For many, ultimately, you’re trying to create income streams that you don’t have to work for (“unearned income”).

This is income such as dividends from shares or rent from property. In normal times, when interest rates aren’t at zero, it would also include interest income from savings.

Sure, it will depend on the amount and what it means to you and your situation. But unearned income gives you choices, earlier in life.

You didn’t need to start 20 years ago. Start now. The whole point is that it’s never too late to start.

Not a tick and flick

However, understand also that making the positive decision to become an investor is not a “one and done” action.

You are not going to make one investment decision on the first day of your investment life that is going to change everything for you.

(Well, technically you could, but it’s about as likely as winning lotto.)

Investing is a lifelong journey. It starts whenever you take the red pill and realise you don’t want to work forever, or fall in love with the concept of unearned income, or simply decide you want to be wealthy. And, frankly, doesn’t end until you either (a) die, or (b) lose your marbles. If the latter occurs, hopefully you’ve got someone making investment decisions for you.

The first decision is important. First you need to find some capital to start with. How much will depend on what sort of investments you are going to make and whether you are going to do the work yourself, or bring in hired help in the way of a financial adviser to help you make the big decisions and keep you on track.

I might sound like a broken record, but it’s the ongoing commitment that is almost more important than the initial lump sum.

This is where investors know they are making ongoing sacrifices to turn $1 now into $2 or $3 in the future.

A proper investment plan needs additions regularly, preferably every month. Each month, add to your investment, whether it’s contributing directly into the investment (to buy managed funds, or more shares) or, when it comes to property, it might be what you need to tip in each month, if the property is negatively geared.

Make it automatic. Set up direct debits to add the money to your investments each month. Don’t concern yourself with whether markets are rising or falling. What you’re trying to get is the long-term average of returns in the asset classes that you’re in.

Think about how your super operates. You will get the long-term return of your super fund, because every month or quarter, your employer puts 10 per cent of your salary into your fund and it gets automatically invested, with no input from you.

If you’re 50 and you’ve been working for 30 years, you’ll have seen this work with your super already. Sure, there have been bumps along the way. That’s just part of investment returns. Most years, your super will be growing.

Following a similar process with your non-super investments will achieve similar results.

Speaking of which … super is also an option to be able to do your investing.

Salary sacrifice will save tax immediately, then the return on the investments will also be taxed at super rates – a maximum of 15 per cent.

The closer you are to retirement, the more sense salary sacrifice tax savings might be to getting you that extra capital to turn into an income stream when you retire.

I won’t accept, from anyone, that they can’t make themselves wealthier. If they are prepared to commit, there is always a way to improve your finances.

For some, it might start with a deep dive into your spending habits to free up some cash for regular contributions.

It’s never too late to make this dream come true. And it’s a definite “red pill” decision, if you’re not there already. The Matrix of investing awaits.

Bruce Brammall is both a financial adviser and mortgage broker and author of books including Debt Man Walking. E: bruce@brucebrammallfinancial.com.au.