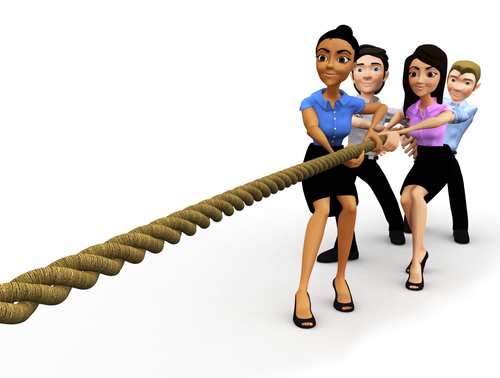 Walk away. No winners here. Not even interesting conversation. Just the painful sound of your head banging against a brick wall.

When it comes to investing, this affliction is most prevalent in the debate of “shares versus property”. People are often set on one, or the other.

Sometimes, you could show facts being relied on are unprovable, or assumptions used indefensible, but … the argument is best avoided.

At other times … I simply can’t stop myself.

Now, can I say, before I launch off, that I love both shares and property. I’ve written a bunch of personal investment books professing my undying love for both.

Most recently, I was reading an argument in favour of share-based funds over property.

The author was using “conclusive” proof that negatively geared property had no basis whatsoever in anyone’s investment portfolio. Ever. (Forget how much wealth it has built for how many millions of Australians over countless decades.)

It was asserted that if you bought investment property, your losses over the first 20 years would be around $250,000. After tax deductions for negative gearing, you would be out of pocket around $180,000.

But shares are, apparently, risk-free and come with guaranteed returns. Using only the guaranteed losses on property, you would ahead about $350,000 after 20 years.

The annual increase in the share portfolio value was approximately 5.2 per cent. Then capital was added each year according to what was “lost” by the negatively geared property (approximately $7000-9000 a year), then compounded for 20 years.

In essence, you’ll get a return of 5.2 per cent until Buzz Lightyear calls an end to “infinity and beyond”.

Initial rental return of 4 per cent. Costs associated with the investment were around 7 per cent (depreciation was added in as a “cash” cost, even though it isn’t). Essentially, a 3 per cent loss on property every year.

Rent was increased at just 3 per cent a year. This meant it would have been around the time of the “second coming” for rents to actually exceed costs. You’ll lose money on property until, pretty much, Buzz declares infinity over.

But the most inexplicable part of the argument? Property prices would never increase in value.

This was the argument. No property price increase, at all, over two decades.

It could happen, I guess. But it hasn’t in the last 100 years. It could also, just as easily, happen to shares. For example, since the peak in November 2007, Australia’s share market is still down about 25 per cent. There’s 9.5 years.

The late, great, Muhammad Ali was known for his “rope a dope” strategy. Is that what’s being attempted with the assertion that property prices will not rise over the next 20 years?

Each comes with risks – too numerous to go into here. But in any comparison that anyone is going to make about the two, must be “fair and reasonable”.

People blind to other arguments or opinions – be it investment, religion, politics, child-rearing, football teams or best flavour of ice-cream – are largely best ignored.

When it comes to the shares versus property debate, rational arguments need to start with the premise that both are capable of returning similarly in total returns.

But to claim that one asset class (property or shares) will have negative returns, essentially for a lifetime, and the other will be strongly positive over the same period, is just, simply, indefensible.