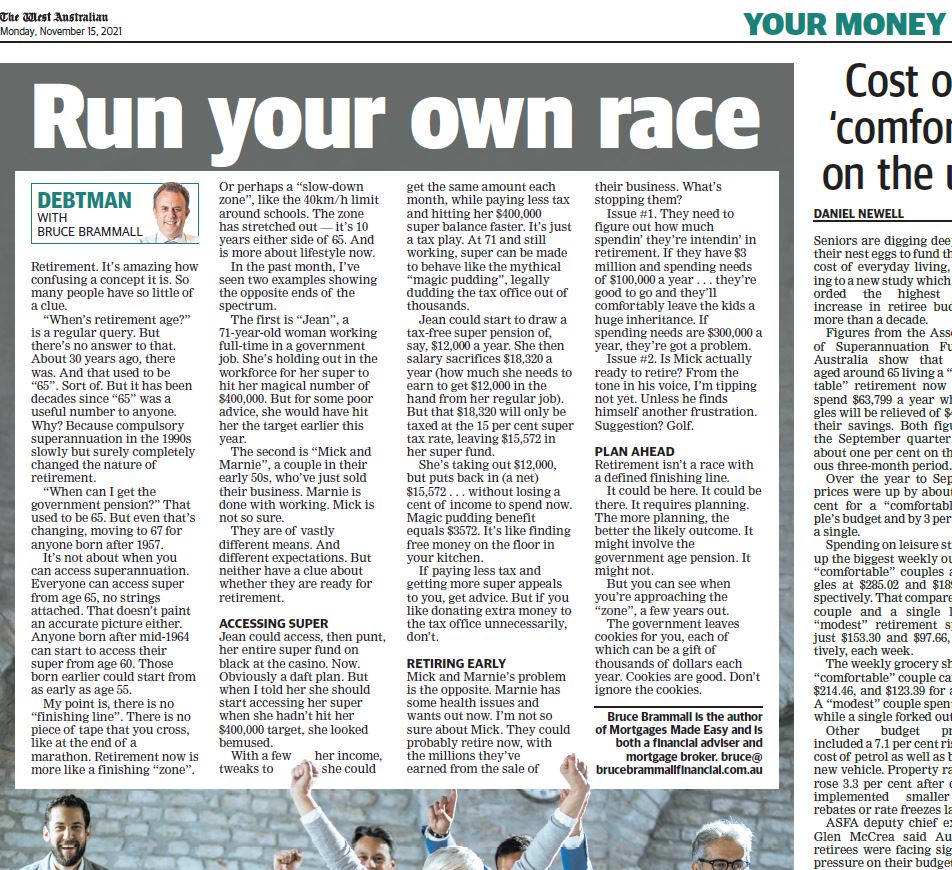 Retirement. It’s amazing how confusing a concept it is. So many people have so little of a clue.

But it has been decades since “65” was a useful number to anyone.

Why? Because compulsory superannuation in the 90s slowly but surely completely changed the nature of retirement.

“When can I get the government pension”. That used to be 65. But even that’s changing, moving to 67 for anyone born after 1957.

That doesn’t paint an accurate picture either. Anyone born after mid-1964 can start to access their super from age 60. Those born earlier could start from as early as age 55.

My point is … there is no “finishing line”. There is no piece of tape that you cross, like at the end of a marathon.

Retirement now is more like a finishing “zone”. Or perhaps a “slow-down zone”, like the 40kmh limit around schools.

The zone has stretched out – it’s 10 years either side of 65. And is more about lifestyle now.

In the last month, I’ve seen two examples showing the opposite ends of the spectrum.

The first is “Jean”, a 71-year-old woman working full-time in a government job. She’s holding out in the workforce for her super to hit her magical number of $400,000.

But for some poor advice, she would have hit her number earlier this year.

The second is “Mick and Marnie”, a couple in their early 50s, who’ve just sold their business. Marnie is done with working. Mick is not so sure.

They are of vastly different means. And different expectations. But neither have a clue about whether they are ready for retirement.

Jean could access, then punt, her entire super fund on black at the casino. Now. Obviously a daft plan.

But when I told her she should start accessing her super, when she hadn’t hit her $400,000 target, she looked bemused.

With a few tweaks to her income, she could get the same amount each month, while paying less tax and hitting her $400,000 super balance faster.

At 71 and still working, super can be made to behave like the mythical “magic pudding”, legally dudding the tax office out of thousands.

Magic pudding benefit equals $3572. It’s like finding free money on the floor in your kitchen.

If paying less tax and getting more super appeals to you, get advice. But if you like donating extra money to the tax office unnecessarily, don’t.

Mick and Marnie’s problem is the opposite. Marnie has some health issues and wants out now. I’m not so sure about Mick.

They could probably retire now, with the millions they’ve earned from the sale of their business. What’s stopping them?

Issue #1. They need to figure out how much spendin’ they’re intendin’ in retirement.

If they have $3 million and spending needs of $100,000 a year … they’re good to go and they’ll comfortably leave the kids a huge inheritance.

Issue #2. Is Mick actually ready to retire? From the tone in his voice, I’m tipping not yet. Unless he finds himself another frustration. Suggestion? Golf.

Retirement isn’t a race with a defined finishing line.

It could be here. It could be there. It requires planning. The more planning, the better the likely outcome. It might involve the government age pension. It might not.

But you can see when you’re approaching the “zone”, a few years out.

The government leaves cookies for you, each of which can be a gift of thousands of dollars each year.