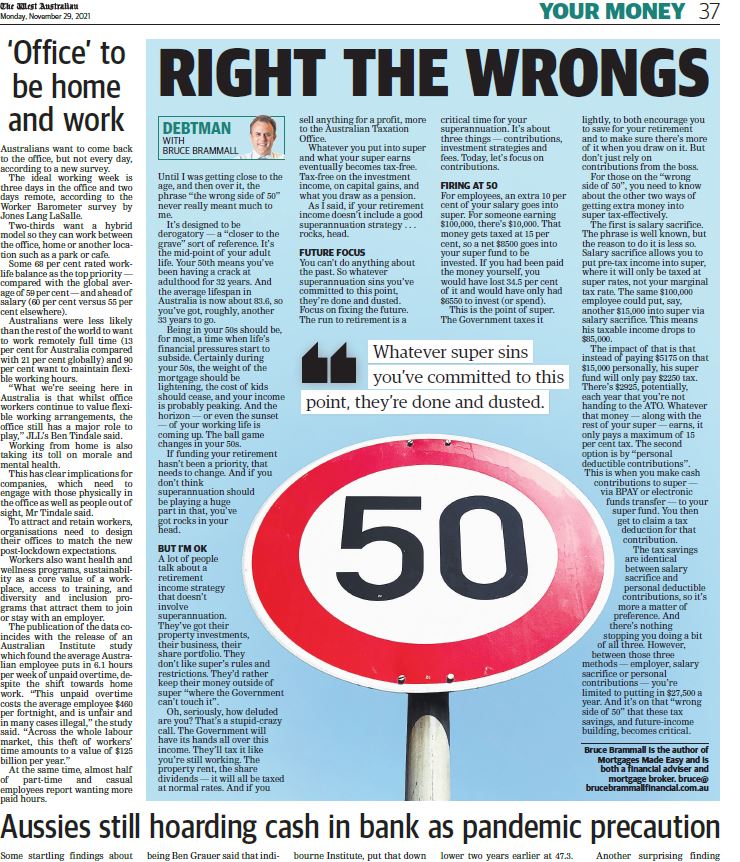 Until I was getting close to the age, and then over it, the phrase “the wrong side of 50” never really meant much to me.

It’s designed to be derogatory – a “closer to the grave” sort of reference.

It’s the mid-point of your adult life. Starting at 18, your 50th means you’ve been having a crack at adulthood for 32 years. And the average lifespan in Australia is now about 83.6, so you’ve got, roughly, another 33 years to go.

Being in your 50s should be for most a time when life’s financial pressures start to subside.

Certainly during your 50s, the weight of the mortgage should be lightening, the cost of kids should cease and your income is probably peaking.

And the horizon (or even the sunset) of your working life coming up.

The ball game changes in your 50s.

If funding your retirement hasn’t been a priority, that needs to change. And if you don’t think superannuation should be playing a huge part of that, you’ve got rocks in your head.

A lot of people talk about a retirement income strategy that doesn’t involve superannuation.

They’ve got their property investments, their business, their share portfolio. They don’t like super’s rules and restrictions. They’d rather keep their money outside of super “where the government can’t touch it”.

Oh, seriously, how deluded are you? That’s a stupid-crazy call. The government will have their hands all over this income. They’ll tax it like you’re still working.

The property rent, the share dividends, will all be taxed at normal rates. And, if you sell anything for a profit, more to the ATO.

Whatever you put into super and what your super earns eventually becomes tax-free. Tax-free on the investment income, on capital gains and what you draw as a pension.

As I said, if your retirement income doesn’t include a good superannuation strategy … rocks, head.

You can’t do anything about the past. So whatever superannuation sins you’ve committed to this point, they’re done and dusted.

Focus on fixing the future.

The run to retirement is a critical time for your superannuation. It’s about three things – contributions, investment strategies and fees. Today, let’s focus on contributions.

That money gets taxed at 15 per cent, so a net $8500 goes into your super fund to be invested. If you had been paid the money yourself, you would have lost 34.5 per cent of it and would have only had $6550 to invest (or spend).

This is the point of super. The government taxes it lightly, to both encourage you to save for your retirement and to make sure there’s more of it when you draw on it.

But don’t just rely on your boss’s contributions.

For those on the “wrong side of 50”, you need to know about the other two ways of getting extra money into super tax-effectively.

The first is salary sacrifice. The phrase is well known, but the reason to do it less so.

Salary sacrifice allows you to put pre-tax income into super, where it will only be taxed at super rates, not your marginal tax rate.

Whatever that money (along with the rest of your super) earns, it only pays a maximum of 15 per cent tax.

The second option is by “personal deductible contributions”. This is when you make cash contributions to super (via Bpay or EFT) to your super fund. You then get to claim a tax deduction for that contribution.

The tax savings are identical between salary sacrifice and personal deductible contributions, so it’s more a matter of preference. And there’s nothing stopping you doing a bit of all three.

However, between those three methods (employer, salary sacrifice, or personal contributions), you’re limited to putting in $27,500 a year.

And it’s that “wrong side of 50”, when some of those financial pressures have begun to ease, that these tax savings, and future-income building, becomes critical.