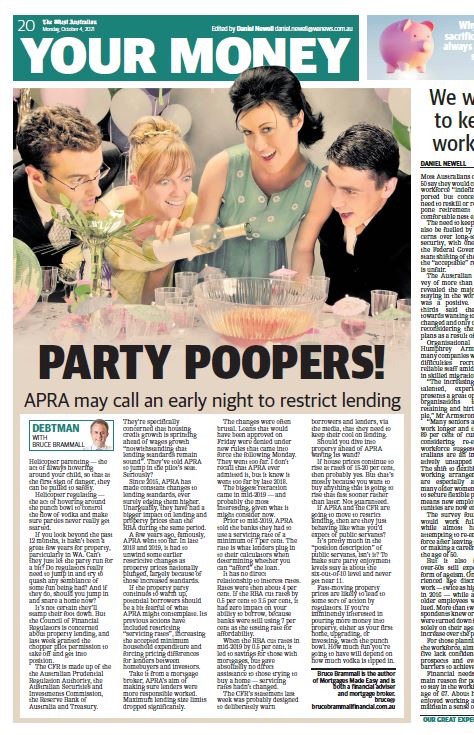 Helicopter parenting: the act of always hovering around your child, so that at the first sign of danger, they can be pulled to safety.

Helicopter regulating: The act of hovering around the punch bowl, to control the flow of vodka, to make sure parties never really get started.

Hey, if you look over a longer period than a year, it hasn’t been a great few years for property. So, can’t they just let the party run for a bit?

Do regulators really need to jump in and try to quash any semblance of some fun being had? And if they decide to do that, should you jump in and snare some property now?

It’s not certain they’ll stamp their foot down. But the Council of Financial Regulators is concerned about property lending. And last week granted the chopper pilot permission to take off and get into position.

The CFR is made up of APRA, ASIC, the Reserve Bank and Treasury. They’re specifically concerned housing credit growth is sprinting ahead of wages growth “notwithstanding that lending standards remain sound”.

They’ve told APRA, the prudential regulator, to jump in the pilot’s seat.

Since 2015, APRA has made constant changes to lending standards, ever surely edging them higher.

Unarguably, they have had a bigger impact on lending and property prices than the Reserve Bank during the same period.

A few years ago, famously, APRA went too far. In late 2018 and 2019, APRA had to unwind some earlier restrictive changes, as property prices nationally plunged, largely because of their increased standards.

If the property party continues to warm up, potential borrowers should be a bit fearful of what APRA might contemplate.

The changes were often brutal. Loans that would have been approved on Friday were denied under new rules that came into force the following Monday.

The biggest retraction came in mid-2019. And probably the most interesting, given what they might consider now.

Prior to mid-2019, APRA told the banks they had to use a “servicing rate” of a minimum of 7 per cent. The servicing rate is the rate that lenders plug in to their calculators when determining whether you can “afford” the loan.

It has no direct relationship to interest rates. Rates were then around 4 per cent. If the RBA cut rates by 0.5 per cent to 3.5 per cent, it had zero impact on your ability to borrow, as banks were still using 7 per cent as the testing rate for affordability.

When the RBA cut rates in mid-2019 by 0.5 per cent, it led to savings for those with mortgages, but gave absolutely no direct assistance to those trying to buy a home, as servicing rates hadn’t changed.

The CFR’s statement last week was probably designed to deliberately warn borrowers and lenders, via the media, that they need to “keep their cool” on lending.

Should you dive into property ahead of APRA waving its wand?

If house prices continue to rise at rates of 15-20 per cent, then probably yes. But that’s mostly because you want to buy anything that is going to rise that fast sooner rather than later. Not guaranteed.

If APRA and the CFR are going to move to restrict lending, then … are they just behaving like what you’d expect of public servants?

It’s pretty much in the “position description” of public servants, isn’t it? To make sure party enjoyment levels stay at around the 6/10 level and never get near 11.

Main point is that fast-moving property prices are likely to lead to some sort of action by regulators.

If you’re imminently interested in pouring more money into property, either as your first home, upgrading, or investing, keenly watch the punch bowl.

How much fun you’re going to have will depend on how much vodka is tipped in.