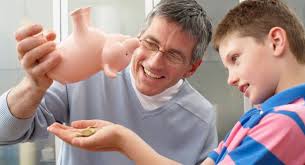 The on-off argument went for longer than a year. But, finally, Mrs DebtMan and I agreed on terms. And a way forward.

It was tough. As always in these situations, there were no outright winners. Both sides had to compromise. But at least it didn’t turn into a “lawyer’s picnic”.

(No, this wasn’t about us separating! We’re stronger than ever.)

Bizarrely, this was about the DebtKids doing chores for pocket money.

We both agreed the kids needed to start doing chores. The problem was remuneration – how much they each got paid.

My argument was that payment should be age-related, as it had been in my house growing up. I was a couple of years older than my brother. I got a bit more (it started at a $1 a week for me, and 80c for my brother).

My parents’ thinking was my brother was receiving pocket money from an earlier age (8 versus 10) and would receive it until the same age, 18, so effectively received pocket money for two years longer than I did.

But Mrs DebtMan and I have a pigeon pair, with DebtBoy being the oldest. My wife was adamant DebtGirl should not be paid less for doing the same work.

And that became the sticking point. For a year. (Can you imagine how many dishes had piled up in the sink while negotiations were taking place?)

The final compromise was DebtBoy would do a specific extra chore each week.

Payment terms were easier. Two-thirds in the hand each week for immediate spending, while one-third went directly into a savings account for longer-term wants.

A couple of years down the track, Mrs DebtMan recently decided they need EFTPOS or phone access to their funds. And awa-a-a-ay goes their savings!

Unless, perhaps, I can get them into investing. The first conversations have been had.

My first share-based investment was suggested to me by my Mum. The deal was that if I wanted to drive the car, I needed to have the excess (about $500 back then) tucked away where I couldn’t touch it easily.

Mum was a bit of an investor at the time. So when I said “What should I invest in?”, her answer was a market darling of the 1980s, CSR.

The time was late 1987, not long before I got my licence. Remember what also happened in late 1987? The greatest stock market crash in history.

(Also, a few years later, Midnight Oil would write “Blue Sky Mine”, about CSR’s asbestos mines at Wittenoom and the diseases contracted by workers.)

A few learnings. The first is I never blamed Mum for the CSR call – the massive upside was she got me hooked on investing and there were some other winners and losers of my own calls during the same period. She gave me the bug. And when my own kids start investing, the advice will be low-cost index funds.

Why index funds for kids? (Or, actually, for anyone?)

Choosing individual investments is, at best, going to leave you with a 50-50 chance of winning. You buy one stock and it might outperform, or underperform, what everything else is doing – the index.

You might watch your ABC stock rise 5 per cent, but you’ve actually lost if the rest of the market has done 10 per cent.

Similar, you might watch ABC fall 5 per cent and feel like a loser. But if the rest of the market fell 10 per cent, you’ve outperformed.

Don’t take that sort of risk with kids and starting out in their investing lives.

Index funds give diversified, low-cost access to wide-range of investments in that chosen market, be that shares, property or fixed interest, each of which can be either domestic or international.

Therefore, if the broader market does 10 per cent, you’ll get an almost identical return, less the very small cost for the index fund. You can get the benefits of diversification for around 0.25 per cent, or less (though you might also have to pay extra if on a platform).

DebtBoy is keen. We had long chats during the Covid lockdown. Next up, DebtGirl.

And I’m hoping this conversation won’t lead to another year-long argument with Mrs DebtMan!