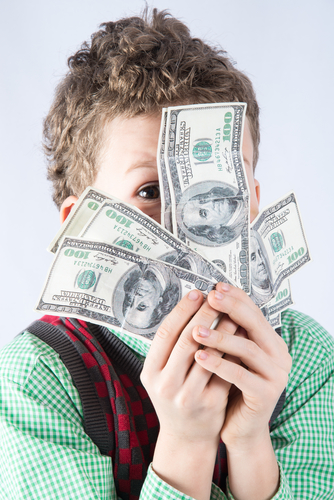 Mrs Debtman recently came to me with a concerning scenario. About her spending habits.

Oh, God, where would I start? Hang on, is this one of those no-win questions? Could the wrong answer end my marriage?

Phew. We retraced her steps and accounted for about $300, including several purchases she’d forgotten about. But she was still adamant there should be more in her purse. While she was perplexed, I assumed there’d been a few extra treats for the kids, as they were ferried to/from sporting events.

Days later, I was looking for a lost item in one of the DebtKids’ bedrooms. I stumbled across a gigantic pile of empty lolly bags.

The DebtKid in whose room the evidence was found was sat down and grilled. Denials were made. (But not believed.)

The following day, a $20 note fell out of a school jacket pocket.

Tough love was, clearly, the only option. The police were called. Charges were laid. Court case is pending. Sadly, we’ve lost one of our children to the juvenile justice system.

Of course, I’m kidding. Further, I take some blame.

It turned out a lot of friends were stopping off at the shops on the way to school and buying huge bags of lollies each day. Peer pressure. Sugar and kids is simply a magnetic force.

Were the others also lightening their parents’ purses? Unlikely. It was probably kids spending their pocket money. Which our kids weren’t receiving, and was clearly overdue.

It had been on my to-do list. For years, to be honest. Lax parenting.

Kids will learn best by being able to make some money choices and make small mistakes. From an amount of money, they need to learn that some is for immediate spending, some is to save for slightly bigger items and some should go towards long-term goals.

So, the new order is constant discussions about their immediate and longer-term financial priorities are. These all change, constantly, so the conversations will evolve.

Spending priorities is something we should all be considering constantly.

And it’s that which is the single best thing you can do to teach your kids good money values. To be good with money yourself. So much of what kids learn is picked up directly, though unintentionally, from their parents via “learned behaviour”.

Parents are generally the single biggest influencers of their children. They will learn so many of your good behaviours. And your bad.

So, be a shining example to your kids. Talk about your short-, medium- and long-term priorities.

This will help them understand an important concept – that money is not unlimited. New money is earned. Money can be saved, invested.

You have a certain amount (taught through concepts such as pocket money) you can spend. To keep it simple, and not to introduce the concept of credit too early, keep it what they actually have as cash, or in their bank account.

Personally, I think getting your child to deposit money into a bank account is probably quaint and overrated. Transfer money into their account electronically.

While we grew up on the folding stuff, this generation might be the last one to see it.

Interestingly, a recent survey by the Financial Planning Association said we believe this generation of youths will struggle with the concept of money, because they don’t actually see it. They are the “invisible money generation” – everything is spent via cards, online, or through phones or watches.

Rubbish. They’ll adjust. Previous generations dealt with everything being cash. We’ve become pretty good at being half cash, half electronic, money. The next generation will adapt, comfortably, to an all e-money society.

Most importantly, talk to them about money. Regularly. Your wins and your mistakes. And what they think they’ve got right and wrong.