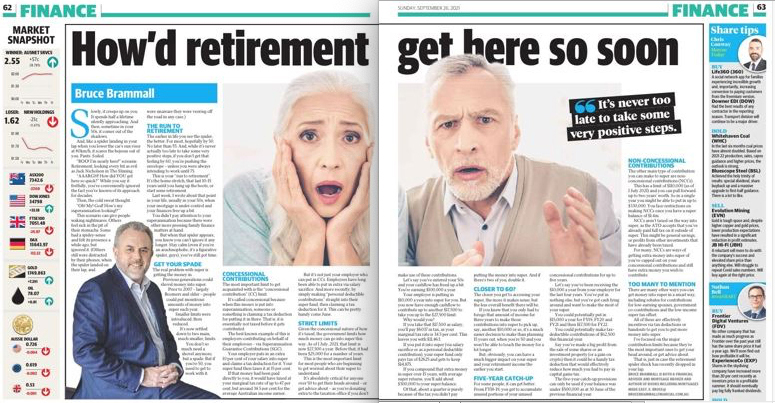 Slowly, it creeps up on you. It spends half a lifetime silently approaching. And then, sometime in your 50s, it comes out of the shadows.

And, like a spider landing in your lap when you lower the car’s sun visor at 80kmh, it scares the bejesus out of you. Pants. Soiled.

“AAARGH! How did YOU get here so quick?” While you’ve said it fretfully, you’ve conveniently ignored you’ve known of its approach for decades.

Then, the cold sweat thought.

This scenario can give people waking nightmares. Others feel sick in the pit of their stomachs. Some had a spidey-sense and felt its presence a while ago, but ignored it. (Others still were distracted by their phones, when the spider landed on their lap, and were unaware they were veering off the road in any case.)

The run to retirement

The earlier in life you see the spider, the better. For most, hopefully by 50. No later than 55. And, while it’s never actually too late to take some very positive steps, if you don’t get that feeling by 60, you’re pushing the envelope … unless you were always intending to work until 75.

This is your “run to retirement”. It’s the home stretch, that last 10-15 years until you hang up the boots, or start semi-retirement.

Last week, I wrote about that point in your life, usually in your 50s, when your mortgage is under control and your finances free up a bit.

You didn’t pay attention to your superannuation because there were other more pressing family finance matters at hand.

But when that spider appears … you know you can’t ignore it any longer. Stay calm, even if you’re an arachnophobe. It’s a figurative spider, guys. No need to reach for a shoe, or the Mortein.

The real problem with super is getting the money in.

Previous generations could literally shovel money into super. Prior to 2007 –largely Boomers and older – people could put in monstrous amounts of money into super each year.

Smaller limits were introduced, then reduced. It’s now settled down to two main, much smaller, limits.

You don’t so much need a shovel anymore, but a spade. But if you’re 50, you need to get to work with it.

The most important limit to get acquainted with is the “concessional contribution” (CC) limit.

It’s called concessional because when this money is put into superannuation, someone or something is claiming a tax deduction for putting it in there. That is, it is essentially not taxed before it gets contributed.

The best known of this is by employers contributing on behalf of their employees – via Superannuation Guarantee Contributions (SGC).

Your employer puts in an extra 10 per cent of your salary into super and claims a tax deduction for it. Your super fund then taxes it at 15 per cent.

If that money had been paid directly to you, it would have taxed at your marginal tax rate of up to 47 per cent, but around 34.5 per cent for the average Australian income earner.

But it’s not just your employer who can put in CCs. Employees have long been able to put in extra via salary sacrifice. And more recently, by simply making “personal deductible contributions” straight into their super fund, then claiming a tax deduction for it. This can be pretty handy come June.

This is the most important limit for most people who are beginning to get worried about their super to understand. It’s absolutely critical for anyone over 50 to get their heads around – or get advice about – as you’re donating extra to the taxation office if you don’t make use of these contributions.

If you put it into super (via salary sacrifice or as a personal deductible contribution), your super fund only pays tax of $2625 and gets to keep $14,875.

If you compound that extra money in super over 15 years, with average super returns, you’ll add about $300,000 to your super balance. (And of that, about a quarter is purely because of the tax you didn’t pay putting the money into super.)

And if there’s two of you, double it.

The closer you get to accessing your super, the more it makes sense, but the less overall benefit there will be.

If you knew that you only had to forego that amount of income for three years to make those contributions into super to pick up, say, another $10,000 or so, it’s a much easier decision to make than planning 15 years out, when you’re 50 and you won’t be able to touch the money for a lot longer.

But, obviously, you can have a much bigger impact on your super and your retirement the earlier you start.

For some, it can get better.

From FY18-19, you get to accumulate unused portions of your unused concessional contributions for up to five years.

Let’s say you’ve been receiving the $10,000 a year from your employer for the last four years. You’ve put in nothing else, but you’ve got cash lying around and want to make the most of your super.

Say you’ve made a big profit from the sale of some shares or an investment property (or a gain on crypto) … there’s a handy tax deduction that would effectively reduce how much you had to pay in capital gains tax.

The five-year catch-up provisions can only be used if your balance was under $500,000 as at 30 June of the previous financial year.

The other main type of contribution you can make to super are non-concessional contributions (NCCs).

NCCs aren’t taxed on the way into super, as the ATO accepts that you’ve already paid full tax on it outside of super. This might be general savings, or profits from other investments that have already been taxed.

For many, NCCs are ways of getting extra money into super of you’ve capped out on your concessional contributions and still have extra money you wish to contribute.

Too many to mention

There are many other ways you can get money into super in a smart way, including rebates for contributions for low-earning spouses, government co-contributions and the low-income super tax offset. All of which are effectively incentives via tax deductions or handouts, to get you to put more money into super.

I’ve focussed on the major contribution limits because they’re the most important ones to get your head around, or get advice about.

Just in case the retirement spider shock has recently dropped in your lap.