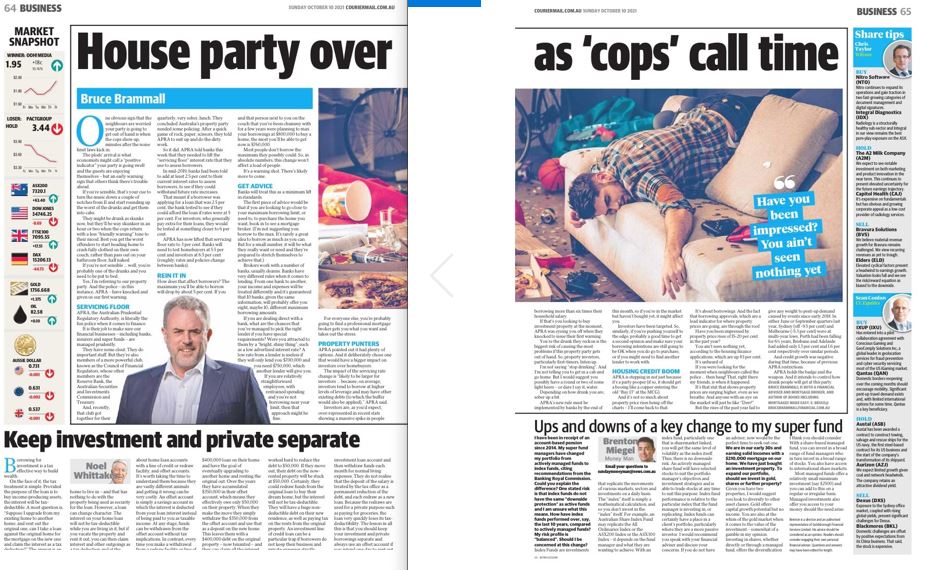 One obvious sign the neighbours are worried your party is going to get out of hand is when the cops show up, minutes after the noise limit laws kick in.

The plods’ arrival is what economists might call a “positive indicator” your party is going swell and the guests are enjoying themselves. But an early warning sign that others think there’s trouble ahead.

If you’re sensible, that’s your cue to turn the music down a couple of notches from 11 and start rounding up the worst of the drunks and get them into cabs.

They might be drunk as skunks now, but they’ll be way skunkier in an hour or two, when the cops return with a less “friendly warning” tone to their mood. Best you get the worst offenders to start heading home to crash fully clothed on their own couch, rather than pass out on your bathroom floor, half naked.

If you’re not sensible … well, you’re probably one of the drunks and you need to be put to bed.

Yes, I’m referring to our property party. And the police – in this instance, APRA – have knocked and given us our first warning.

APRA, the Australian Prudential Regulatory Authority, are literally the fun police when it comes to finance.

It is their job to make sure our financial businesses, including banks, insurers and super funds, are managed prudently.

They have some clout. They do important stuff. But they’re also members of a more powerful club, known as the Council of Financial Regulators, whose other members are the Reserve Bank, the Australian Securities and Investments Commission and Treasury.

And, recently, that club got together for their quarterly, very sober, lunch. They concluded Australia’s property party needed some policing. After a quick game of rock, paper, scissors, they told APRA to suit up and do the dirty work.

APRA told banks this week that they needed to lift the “servicing floor” interest rate that they use to assess borrowers.

In mid-2019, banks had been told to add at least 2.5 per cent to their current interest rates to assess borrowers, to see if they could withstand future rate increases.

That meant if a borrower was applying for a loan that was 2.5 per cent, the bank tested to see if they could afford the loan if rates were at 5 per cent. For investors, who generally pay extra for their loans, they would be tested at something closer to 6 per cent.

APRA has now lifted that servicing floor rate to 3 per cent. Banks will need to test home buyers at 5.5 per cent and investors at 6.5 per cent (roughly, rates and policies change between banks).

How does that impact borrowers? The maximum you’ll be able to borrow will drop by about 5 per cent. If you and that person next to you on the couch that you’ve been chummy with for a few years were planning to max your borrowings at $800,000 to buy a home, the most you’ll be able to get now is $760,000.

Most people don’t borrow the maximum they possibly could. So, in absolute numbers, this change won’t impact a load of people.

Banks will treat this as a minimum lift in standards.

The first piece of advice would be that if you are looking to go close to your maximum borrowing limit, or need to, to purchase the home you want, book in to see a mortgage broker.

(I’m not suggesting you borrow to the max. It’s rarely a great idea to as much as you can. But for a small number, it will be what they really want or need and they’re prepared to stretch themselves to achieve that.)

Brokers work with a number of banks, usually dozens. Banks have very different rules when it comes to lending. From one bank to another, your income and expenses will be treated differently and it’s guaranteed that ten banks, given the same information, will probably offer you eight, maybe ten, different maximum borrowing amounts.

If you are dealing direct with a bank, what are the chances that you’ve managed to pick the right lender if you have special requirements? Were you attracted to them by a “bright, shiny thing”, such as a low advertised interest rate? A low rate from a lender is useless if they will only lend you $700,000 and you need $750,000, which another lender will give you.

If you are relatively straight-forward employees, with restrained spending and you’re not borrowing near your limit, then that approach might be fine.

For everyone else, you’re probably going to find a professional mortgage broker gets you what you want and takes out the stress.

APRA pointed out they had plenty of options. And they deliberately chose an option that would have a bigger impact on investors over home-buyers.

The impact of the servicing rate change is “likely to be larger for investors … because, on average, investors tend to borrow at higher levels of leverage and may have other existing debts (to which the buffer would also be applied),” APRA said.

Investors are, as you’d expect, over-represented in recent stats showing a massive spike in people borrowing more than six times their household salary.

If that’s you looking to buy investment property at the moment, APRA was eyeing you off when they knocked to issue their first warning.

You’re the drunk they reckon is the biggest risk of causing the most problems, if this property party gets out of hand.

I’m not saying “stop drinking”. And I’m not telling you to get in a cab and go home. But I would suggest you possibly have a round or two of some light beers – or dare I say it, water.

Depending on how drunk you are, sober up a bit.

APRA’s new rule must be implemented by banks by the end of this month, so if you’re in the market but haven’t bought yet, it might impact you.

Investors have been targeted. So, similarly, if you’re pushing yourself to the edge, probably a good time to get a second opinion and make sure your borrowing intentions are still going to be okay when you do go to purchase, or if you might need to find another lender to work with.

APRA is stepping in not just because they’re party poopers (if so, they should get a boo-ing like a copper entering the old “Bay 13” at the MCG).

And it’s not so much about property price rises being off the charts – I’ll come back to that.

It’s about borrowings. And the fact that borrowing approvals, which are a lead indicator for where property prices are going, are through the roof.

Have you been impressed by property price rises of 15-20 per cent in the last year?

You aint seen nothing yet, according to the housing finance applications, which are up 83 per cent. It’s unheard of.

If you were looking for the moment when neighbours called the police … then bang! That, right there my friends, is when it happened.

It’s that stat that shows property prices are surging higher, even as we breathe. And anyone with an eye on the market will just be like “Derr!”

But the rises of the last year fail to give any weight to pent up demand caused by events since early 2018. In either June or September quarters last year, Sydney (off -9.5 per cent) and Melbourne (-5.3 per cent) were at multi-year lows, Perth had been falling for 6.5 years, Brisbane and Adelaide had added only 1.3 per cent and 1.6 per cent respectively over similar periods.

And credit growth was negative during that time, because of previous APRA restrictions.

APRA holds the badge and the weapon. And they intend to control how drunk people will get at this party.