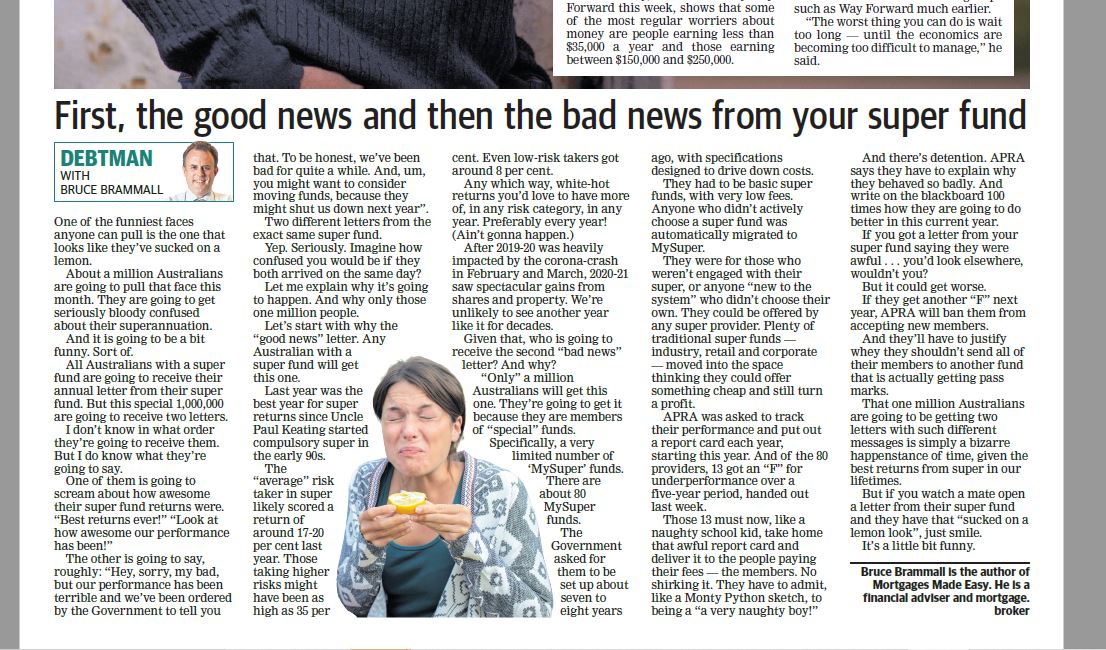 One of the funniest faces anyone can pull is the one that looks like they’ve sucked on a lemon.

About a million Australians are going to pull that face this month. They are going to get seriously bloody confused about their superannuation.

And it is going to be bit funny. Sort of.

One of them is going to scream about how awesome their super fund returns were. “Best returns ever!” “Look at how awesome our performance has been!”

The other is going to say, roughly: “Hey, sorry, my bad, but our performance has been terrible and we’ve been ordered by the government to tell you that. To be honest, we’ve been bad for quite a while. And, um, you might want to consider moving funds, because they might shut us down next year”.

Yep. Seriously. Imagine how confused you would be if they both arrived on the same day? Hahaaahahaaa!

Let me explain why it’s going to happen. And why only those one million people.

Let’s start with why the “good news” letter. Any Australian with a super fund will get this one.

Last year was the best year for super returns since Uncle Paul Keating started compulsory super in the early 90s.

The “average” risk taker in super likely scored a return of around 17-20 per cent last year. Those taking higher risks might have been as high as 35 per cent. Even low risk takers got around 8 per cent.

Any which way, white-hot returns you’d love to have more of, in any risk category, in any year. Preferably every year! (Ain’t gonna happen.)

After FY20 was heavily impacted by the Corona-crash in February and March, FY21 saw spectacular gains from shares and property. We’re unlikely to see another year like it for decades.

Given that, who is going to receive the second “bad news” letter? And why?

“Only” a million Australians will get this one.

They’re going to get it because they are members of “special” funds. Specifically, a very limited number of “MySuper” funds.

There are about 80 MySuper funds. The government asked for them to be set up about 7-8 years ago, with specs designed to drive down costs. They had tro be basic super funds, with very low fees. Anyone who didn’t actively choose a super fund was automatically migrated to MySuper.

They were for those who weren’t engaged with their super, or anyone “new to the system” who didn’t choose their own.

They could be offered by any super provider. Plenty of traditional super funds – industry, retail and corporate – moved into the space thinking they could offer something cheap and still turn a profit.

APRA was asked to track their performance and put out a report card each year, starting this year. And of the 80 providers, 13 got an “F” for underperformance over a five-year period, handed out last week.

Those 13 must now, like a naughty school kid, take home that awful report card and deliver it to the people paying their fees – the members. No shirking it. They have to admit, like a Monty Python sketch, to being a “a very naughty boy!”

And there’s detention. APRA says they have to explain why they behaved so badly. And write on the blackboard 100 times how they are going to do better in this current year.

If you got a letter from your super fund saying they were awful … you’d look elsewhere, wouldn’t you?

But it could get worse. If they get another “F” next year, APRA will ban them from accepting new members. And they’ll have to justify whey they shouldn’t send all of their members to another fund that is actually getting pass marks.

That one million Australians are going to be getting two letters with such different messages is simply a bizarre happenstance of time, given the best returns from super in our lifetimes.

But if you watch a mate open a letter from their super fund and they have that “sucked on a lemon look”, just smile. It’s a little bit funny.