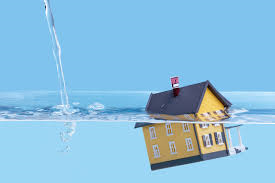 If you want to scare the crap out of yourself, just for fun, go google “mortgage stress”.

I did. Turns out catastrophe is about a heart beat away. Apparently, we’re all going to die. If the Reserve Bank raises interest rates, like ever, Australian households will collapse like a “house of cards”.

According to one expert’s analysis, if I’ve understood correctly, even a minor increase to mortgage rates will cause the whole Australian mainland continent to sink. The Pacific Ocean would join up with the Indian Ocean. Tasmania would remain afloat, but would be sold to the Kiwis for a $1 and would hence be referred to as New Zealand’s “West Island”.

Apparently, Australians are under severe mortgage stress. And the slightest increase in interest rates would cause an apocalypse.

With interest rates at current levels, 820,000 indebted Australian households are in mortgage stress, it is claimed. That’s one in four.

A rise by the RBA of just 0.5 per cent would raise stressed households from 25 to 33 per cent, according to the analysis by Digital Finance Analytics.

A step further – an increase of 1 per cent would put 40 per cent into stress. We’re getting close to half the country here.

Seriously? Are we really this deep in the poo?

I don’t buy DFA’s stats. I don’t accept that one in four Australian households are currently in mortgage stress. I don’t buy that any RBA move upwards will send huge numbers of households over the edge.

A disclaimer in DFA’s stats says they are using a tougher test than most other surveys, which obviously exacerbates their results.

Bu they also seem to assume that households don’t have much control over what goes on with their finances.

If given the choice between going out for an extra dinner and paying the mortgage, we’ll forgo the dinner.

If electricity and power bills rise, we’ll reduce power consumption. The kids will have to miss out on a treat. Dad will have to cut back on his beer consumption. Everyone might have a few less coffees. Christmases and birthdays might be a bit leaner. A less expensive car might be bought. Mum and dad might take their lunch to work, instead of buying it.

That is, the DFA’s figures seem to be pure spreadsheet stuff. And predict that people are, predominantly, morons who can’t prioritise their spending to hold onto their homes.

And another thing … some of their statistics claim some suburbs will hit 100 per cent stress once certain interest rate increases are hit. Yep, everyone with a mortgage will be sweating.

Um … no they won’t. Some people have quite small mortgages, because they have owned their homes for a long time, or have a lot saved in their offset account, or have had a few pay rises over the course of the 5-10 years that they have had a mortgage, or have received an inheritance.

There will never be 100 per cent mortgage stress in a given suburb. To claim so is to accept you’re an idiot.

If interest rates increase, I get “mortgage stress” is going to rise with it.

But let’s not claim that a small increase in interest rates will cause Armageddon. Australians aren’t that dumb. We’ll deal with it, when it happens, by cutting spending elsewhere. Because our home is more important than an extra night out a week. Or my beer fridge being full.

And banks aren’t that stupid either.

When banks are determining if you can afford a loan, they build in a buffer. Current interest rates for home loans are 4 per cent, give or take.

But banks use what’s called a “servicing rate”. Currently, that’s about 7.25 per cent. They want to be sure that you could afford to meet your repayments if interest rates were significantly higher than they are now.

And, as most of us finance types say, you need to build your own buffer, that moat around your finances. Many people do exactly that. Or keep their loans ahead of repayment schedules.

Give us some credit. An apocalypse is not imminent.