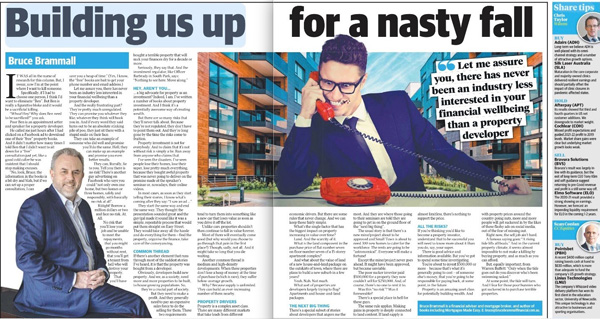 It was all in the name of research for this column. But, I swear, now I’m at the point where now I want to kill someone.

Specifically, If I had to choose one person, I think I’d want to eliminate “Ben”. But Ben is really a figurative bloke and it would be a sacrificial killing.

“Whoa! Hey! Why does Ben need to be sacrificed?” you ask.

Poor Ben is an appointment setter and spruiker for a property developer.

He called me just hours after I had clicked on a Facebook ad to download one of their “free” property books. And it didn’t matter how many times I told Ben that I didn’t want to sit down for a “free” consultation just yet, like a good cold caller, he was insistent that I should stop making excuses.

“No, look Bruce, the information in the books is a bit dry and blah, but if we can set up a proper consultation, I can save you a heap of time.”

(Yes, I know, the “free” books are just the bait to get your phone number and email address.)

Let me assure you, there has never been an industry less interested in your financial well-being than a property developer.

And the really frustrating part? They’re pretty much un-regulated. They can promise you whatever they like, whatever they think will hook you in. And if every word they said turns out to be an absolute stinking pile of poo, they just sit there with a stupid smile on their face.

They can, literally, lie to you. Tell you there is no risk! There’s another guy advertising on Facebook who says you could “not only own one home, but two homes or three homes, safely and responsibly, with basically no risk at all”.

Riiiight! Borrow a million dollars or two and face no risk. At. All.

No risk that you’ll lose your job and be unable to meet the repayments, that you might go months without rent, that you’ll get a tenant from hell who will destroy your property.

That you’ll have bought a terrible property that will suck your finances dry for a decade or more.

And the investment regulator, like Sargent Barbrady  in South Park, says “nothing to see here. Move along”.

… a big advocate for property as an investment? Indeed I am. I’ve written a number of books about property investment. And I think it’s a potentially awesome way of creating wealth.

But there are so many risks that they’ll never talk about. Because they’re not regulated, they don’t have to point them out. And they’re long gone by the time the risks come to fruition.

Property investment is not for everybody. And to claim that it’s not without risk is simply a lie. Run away from anyone who claims that.

I’ve seen the disasters. I’ve seen people lose their homes, lose their super, lose pretty much everything, because they bought awful property that was never going to deliver on the promise made at the spruiker’s seminar, or nowadays, their online videos.

In most cases, as soon as they start telling their stories, I know what’s coming after they say: “I saw an ad …”.

They start the same way and they end the same way. They thought the presentation sounded great and the guy/gal made it sound like it was a simple, repeatable process that would put them straight on Easy Street. They would take away all the hassle and do everything for them – find the property, organise the finance, take care of the conveyancing.

If there’s an element that runs through most of the saddest stories I’ve heard, it is that the property was bought from a developer.

Obviously, developers build new property. And we, as a society, need more and more properties to be built, to house growing populations. So, they’re a crucial part of society.

But they need to make a profit. And they generally need to pay an expensive sales force to do the selling for them. These two requirements tend to turn them into something like a new car, that loses value as soon as you drive it off the lot.

Unlike cars, properties shouldn’t then continue to fall in value forever. Most of them will eventually come good (but why would you choose to go through that pain in the first place?) Though, sadly, not all. And it might take so long that you die waiting.

Another common thread is medium-and high-density developments. When these properties don’t lose a heap of money at the time of purchase (which is rare), they suffer below-average growth.

Why? Because supply is unlimited. They can build an ever-increasing number of them nearby.

Property is a complex asset class. There are many different markets that take leads from different economic drivers. But there are some rules that never change. And we can keep those fairly simple.

What’s the single factor that has the biggest impact on property increasing in value over time?

Land. And the scarcity of it.

And what about the value of land of a new house-and-land package on the outskirts of town, where there are plans to build a new suburb in a few years?

Yeah. Nah. Not much.

What sort of properties are developers largely trying to flog? Apartments and house-and-land packages.

The Next Big Thing

There’s a special subset of stories about developers that angers me the most. And they are where those going to their seminars are told they are going to get in on the ground floor of the “next big thing”.

The usual story is that there’s a new mine/project about to be approved and Small Town is about to need 300 new homes to cater for the workforce. The rents are going to be “astronomical”. Everyone will make a fortune!

Except the mine/project never goes ahead. It might have been approved, but became unviable.

Was this “no risk”? Was it foreseeable?

There’s a special place in hell for these guys.

The same rule applies. Making gains in property is deeply connected to land content. If land supply is almost limitless, there’s nothing to support the price.

If you’re thinking that you’d like to become a property investor, understand that to be successful, you will need to know more about it than you do, say, your super.

There is good advice and information available. But you’ve got to spend some time investigating.

You’re about to invest $500,000 or more – because that’s what it’s generally going to cost – of someone else’s money, that you’re going to be responsible for paying back, at some point in the future.

Property is an amazing asset class for potentially building wealth. And with property prices around the country going nuts at the moment, more and more people will get suckered in by the likes of these flashy ads on social media, out of the fear of missing out.

A famous saying goes, “a rising tide lifts all boats”. And in the current property climate, it seems almost impossible to not make a killing by buying property, and as much of it as you can afford.

But, equally important, from good ol’ Warren Buffett: “Only when the tide goes out do you discover who’s been swimming naked”.

At some point, the tide will turn. And I fear for those poor bunnies who got suckered in to purchase terrible property.