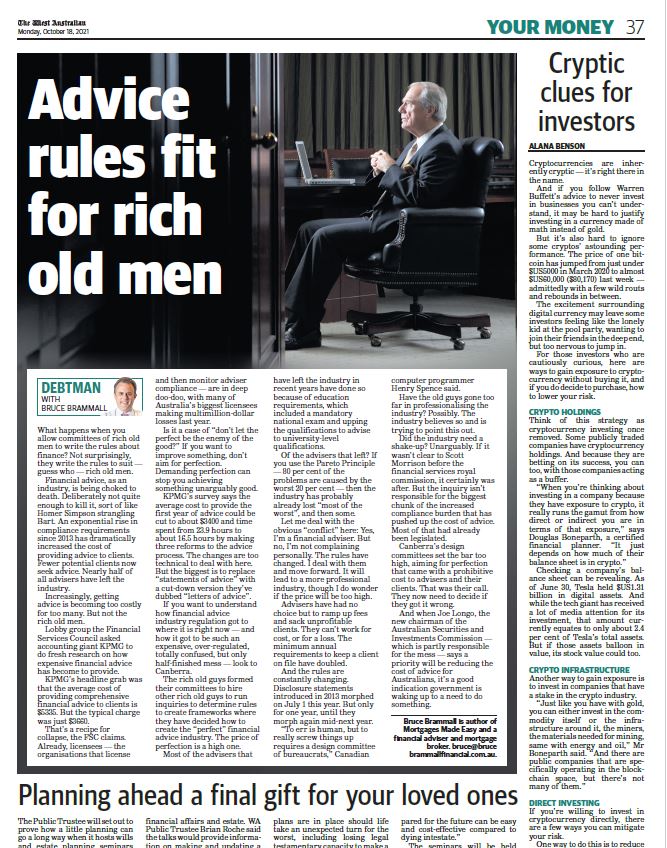 Financial advice, as an industry, is being choked to death. Deliberately not quite enough to kill it, sort of like Homer Simpson strangling Bart.

An exponential rise in compliance requirements since 2013 has dramatically increased the cost of providing advice to clients. Fewer potential clients now seek advice. Nearly half of all advisers have left the industry.

Increasingly, getting advice is becoming too costly for too many. But not the rich old men.

Lobby group the Financial Services Council asked accounting giant KPMG to do fresh research on how expensive financial advice has become to provide.

KPMG’s headline grab was that the average cost of providing comprehensive financial advice to clients is $5335. But the typical charge handed to clients was just $3660.

That’s a recipe for collapse, the FSC claims. Already, licensees – the organisations that licence and then monitor adviser compliance – are in deep do-do, with many of Australia’s largest licensees making multi-million-dollar losses last year.

Is it a case of “don’t let the perfect be the enemy of the good”? If you want to improve something, don’t aim for perfection. Demanding perfection can stop you achieving something unarguably good.

KPMG’s survey says the average cost of $5335 to provide the first year of advice could be cut to about $3400 and time spent from 23.9 hours to about 16.5 hours by making three reforms to the advice process.

The changes are too technical to deal with here. But the biggest is to replace “statements of advice” with a cut-down version they’ve dubbed “letters of advice”.

If you want to understand how financial advice industry regulation got to where it is right now – and how it got to be such an expensive, over-regulated, totally confused, but only half-finished mess – look to Canberra.

The rich old guys formed their committees to hire other rich old guys to run inquiries to determine rules to create frameworks where they have decided how to create the “perfect” financial advice industry in Australia.

The price of perfection is a high one.

Most of the advisers that have left the industry in recent years have done so because of education requirements, which included a mandatory national exam and upping the qualifications to advise to university level qualifications.

Of the advisers that left? If you use the “Pareto principle” – 80 per cent of the problems are caused by the worst 20 per cent – then the industry has probably already lost “most of the worst”, and then some.

(Let me deal with the obvious “conflict” here: Yes, I’m a financial adviser. But no, I’m not complaining personally. The rules have changed. I deal with them and move forward. It will lead to a more professional industry, though I do wonder if the price will be too high.)

Advisers have had no choice, but to ramp up fees and sack unprofitable clients. They can’t work for cost, or for a loss. The minimum annual requirements to keep a client on file have doubled.

And the rules are constantly changing. Disclosure statements that were introduced in 2013 morphed on 1 July this year. But only for one year, until they morph again mid-next year.

“To err is human, but to really screw things up requires a design committee of bureaucrats,” said Canadian computer programmer Henry Spencer.

Have the rich old guys gone too far in professionalising the industry? Possibly. The industry believes so and are trying to point this out.

Did the industry need a shakeup? Unarguably. If it wasn’t clear to Scott Morrison before the Royal Commission, it certainly was after. But the Royal Commission isn’t responsible for the biggest chunk of the increased compliance burden that has pushed up the cost of advice. Most of that had already been legislated.

Canberra’s design committees set the bar too high, aiming for perfection that came with a prohibitive cost to advisers and their clients.

That was their call. They now need to decide if they got it wrong.

And when Joe Longo, the new chairman of ASIC, which is partly responsible for the mess, says a priority will be reducing the cost of advice for Australians … good indication government is waking up to a need to do something.